And you thought your life was eventful...

Not like this!
Posted by Private Beach at 3:07 pm No comments:

Email ThisBlogThis!Share to TwitterShare to FacebookShare to Pinterest
Labels: People

Before 2007 gets too far along, let's give out the Orwell Award for last year's finest example of doublespeak.

Military spotlight on Taiwan
The central government [of China] on Friday said it would strengthen its military ability to thwart rival Taiwan's push for independence while vowing it was committed to the peaceful development of the world's largest army.

Posted by Private Beach at 1:38 pm No comments:

Too late for common sense?

The Hong Kong government's sudden new-found concern for the territory's heritage, following the Star Ferry protests, is welcome if belated (and somewhat limited, since it appears they have ruled out direct acquisition of threatened historic buildings). However, Secretary for Home Affairs Patrick Ho has made it clear that this new awareness will not extend to scrapping the Central Bypass scheme, saying it is too late to cancel a project that has been in the planning stage for four years. Perhaps he hasn't noticed that it's also been opposed by a large proportion of the public for that time, and even been the subject of attempts to stop it through the courts?

Let's examine the government's logic behind this project:
1. Move the Star Ferry to somewhere that's inconvenient for most passengers.
2. Demolish the familiar and popular existing Star Ferry Pier and Queen's Pier.
3. Reclaim part of the already excessively depleted harbour that no one wants to lose.
4. Use the land thus constructed to build a road no one wants (and , let us not forget, a shopping centre no one needs, but which is probably the real driving force behind the project).

The fact is that most of the traffic likely to use the new bypass could be eliminated by:
- accelerating the proposed extension of the MTR Island Line to Kennedy Town (and eventually to Aberdeen via Pokfulam); and
- reducing the ridiculously exorbitant tolls for the Western Harbour Tunnel, so traffic between Kowloon and Western District has no incentive to divert via the old tunnel and travel through Central in order to save money.

Is it really too late for common sense?

Other Views:
Star Ferry: The Beginning of a New Social Movement?

Making It Better:
Friends of the Harbour
SOS - Save Our Shorelines
Posted by Private Beach at 2:20 pm No comments:

On the Eleventh Day of Christmas 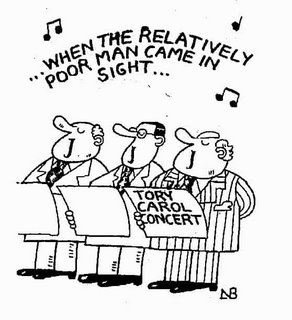 I was planning to post various Christmas stuff, but as usual time got in the way. However, as we are still within the twelve days of Christmas, and in any case tomorrow will be Christmas Day in Russia, I guess it's not too late. Not that the date means much anyway, since one of the few historical facts we can be reasonably sure of about Jesus Christ is that he wasn't born on the 25th of December (nor in zero AD; most historians of the period place his birth around four years earlier).

We owe the present date of our Christmas celebrations to the Emperor Constantine, who wanted to usurp the place of the Roman Festival of Saturnalia when Christianity became the official religion of the Empire (a move from which it has never recovered). Most of our cherished Christmas traditions have nothing to do with Christ, but are either pagan survivals from the various festivals that celebrated the Winter Solstice (as the Chinese still do), like the Christmas Tree and the Yule Log, or Victorian inventions, like the Christmas card and the popular image of Santa Claus in his red robes.

Similarly Easter took over the place and some of the customs (all those eggs!) of the spring fertility festivals which were also common in many cultures. Some religious purists reject all these non-Christian accretions to their faith, but I welcome them as part of mankind's continuing tradition of celebrating the great cycle of the turning seasons.

Anyway, back to Christmas. I haven't tried to post a picture here before, so let's try. The cartoon above was borrowed from Private Eye (please subscribe so they'll forgive me). The funny thing is that when I first read the caption, I took it as a satire on Tony Blair's vacuous New Labour political correctness, until I saw the word "Tory" in the smaller print. Which just goes to show how little difference there is between Britain's two major parties these days.

In his Christmas Eve message, Pope Benedict XVI made a special appeal for the protection of children. He could make a start by protecting them from the priests of his own church.

I have one more Christmas item to post, but that can wait a day or two. If you've already celebrated Christmas, I hope you had a good time. And if I have any Russian readers, Merry Christmas to you!
Posted by Private Beach at 11:10 am No comments:

Hong Kong's Internet access is still rather iffy following the earthquake off Taiwan that damaged several undersea data cables just after Christmas, but is getting better gradually. However the difficulties of access during the last few days have provided me with a perfect excuse for my blogging lethargy. Normal service will be resumed soon.

Meanwhile, looking at the New Year celebrations around the world on TV, I was struck by how positive and joyous everyone seemed. We all know that 2006 was in many ways a horrible year, and that on any reasonable assessment of probability, in 2007 the Iraq War will continue to get bloodier, Israel and the Palestinians will remain at lethal loggerheads, human rights violations will worsen further around the world, terrorist bombings will take innocent lives at random, the rich will get richer while making sure the poor stay poor, more countries will seek to acquire nuclear weapons to keep the imperial US off their backs, thousands of square miles of tropical rainforest will disappear, and global warming will bring the planet a step closer to destruction while politicians do nothing effective about it. Yet in the face of all the evidence, we persist in looking forward to a better year than the one just passed.

From one perspective this is pretty foolish behaviour - the unfounded optimism of a confirmed gambler, always sure that next time the dice will fall differently. Yet I also find this capacity for finding joy and hope in the darkest of times one of the most endearing human characteristics - and one that perhaps helps us to keep going when all logic would lead us to just give up. And maybe one day (it does sometimes happen), if we all do our bit to make it so, the future really will be brighter.