A tunnel too far

Almost the first thing you learn when studying economics is the basic law of supply and demand. Simply put, lower prices increase demand, higher prices reduce it where substitutes are available.

For some reason, the management of the Western Harbour Tinnel seems never to have grasped this elementary rule. Their response to years of losses has always been, not to lower tolls in the hope of attracting more business, but to raise them even further, thereby driving yet more potential users to divert to the congested but much more affordable Cross-Harbour Tunnel between Hung Hom and Causeway Bay instead.

From tomorrow Western Harbour Tunnel fees, already the highest among the three tunnels beneath the harbour, will go up yet again. This could be an indication of chronic stupidity, but I suspect there is another agenda behind it. The company may figure that the government, exasperated by the impact of CHT congestion on traffic management, will eventually solve its problems by taking the Western Tunnel off its hands, implying that the company would receive substantial compensation and rid itself of a loss-making asset. Watch this space.
Posted by Private Beach at 10:34 am 2 comments:

32 years on, it emerges in a legal case that Belgian singer Plastic Bertrand did not actually sing on his big hit "Ca Plane Pour Moi". Never mind, it's still a fun record.

These days, of course, it makes no difference who actually sings on a pop record. Today's over-processed production style makes every song sound computer-generated anyway.

Disclaimer - I get a small commission from Amazon UK if you buy the CD through the picture link here.
Posted by Private Beach at 11:24 am No comments:

You learn something new every day

Did you know that a zebra's stripes form concentric rings around the base of its tail? No? Neither did I until I came face to face - well, face to backside - with this specimen. 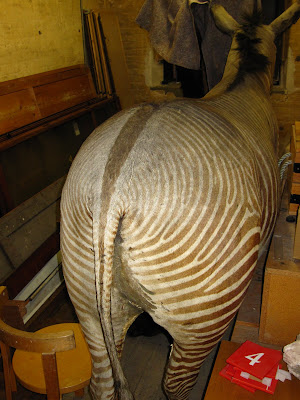 So much to learn, so little time...
Posted by Private Beach at 9:59 am No comments:

Israel is reported to have destroyed the homes of 300 Bedouin villagers in the Negev Desert which it claims were illegally built.

It is good news that Israel has made a start on destroying homes constructed illegally. Now perhaps they will get to work on demolishing the thousands of Jewish settlements erected on stolen Palestinian land in the occupied West Bank, in clear violation of international law. But I'm not holding my breath....
Posted by Private Beach at 11:00 am No comments:

Oddest headline of the day: from the BBC News website, Sailor found dead in Afghanistan. Considering Afghanistan is a landlocked country, you'd have great difficulty sailing there!

The actual story, when read, turns out to be about the death of a US Navy man serving with the American forces there. Which brings us to the Wikileaks release of numerous documents suggesting that America's war effort in that country is also well of course. However, is anyone really surprised that the war is apparently going less well than we are led to believe from public statements? War is a matter of psychology as well as brute force; success depends partly on demoralising the enemy, so why would you want to let them know how badly they're hurting you?
Posted by Private Beach at 10:46 am No comments: