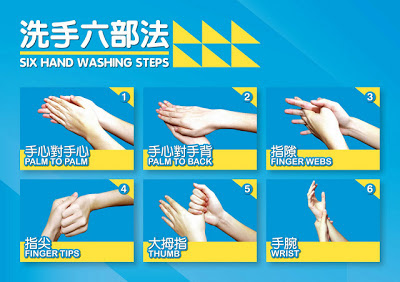 I was in a washroom the other day and noticed that there were eight wash basins but only one warm air hand dryer, one of the old slow type.  Now it seems obvious to me that, since it takes far longer to dry your hands with one of those than it does to wash them (even when you follow all six steps of the Hong Kong government's helpful instructions - if my grandmother was still alive, they'd probably have a poster teaching her to suck eggs), the number of dryers should be greater than the number of wash basins.  Since all public washrooms seem to be set up that way, I just wonder why the people who design these places have never noticed this.
Posted by Private Beach at 4:53 pm No comments: 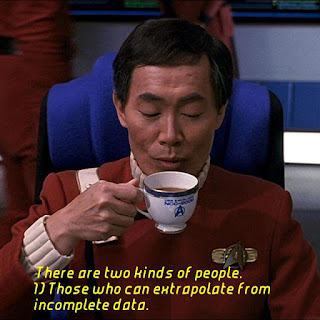 Actually it was the night before last, but that line has a nice ring to it, resonant of the song about Joe Hill. In the dream, my wife and I were sitting near the front of a large square-shaped restaurant - Chinese, I think it was.  I looked around the restaurant, and George was seated at a table in the back corner.  He saw me and waved to me.

In real life, I don't know George personally, but I have been a Star Trek fan for decades.  Not a Trekkie - I don't attend conventions dressed up as a Ferengi, converse in Klingon, or collect scale models of the starship Enterprise - just someone who has seen and enjoyed most episodes of The Original Series, The Next Generation, and Enterprise - and would probably also enjoy Voyager and Deep Space Nine if Hong Kong's useless TV stations could be bothered to find room for them among the rubbish they usually churn out.

As is generally known, Star Trek creator Gene Roddenberry insisted on a multiracial cast at a time when US TV programmes were wall-to-wall vanilla, figuring that by the 24th century the human race might have grown up.  Much has been made of Nichelle Nichols' position as the first black woman to hold a major role in a major series, but it has been less often noted that, until Takei appeared in The Original Series, few Asian faces made it to prime time TV either.

Anyway, all this is by way of an excuse for passing on the fun picture above, which comes from Takei's Facebook page - generally a witty and entertaining read.  Enjoy!

says The Sun.  Most of us thought he'd been camping for years already. 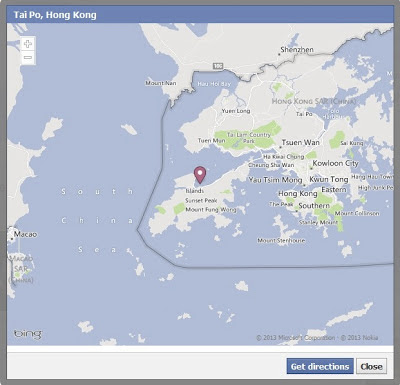 According to Facebook, Tai Po is near the airport on Lantau island, more or less diagonally opposite its real location..  I can only assume they get their maps from Apple, not Google.  Still, that should make it quicker to get home from the airport next time I land there!
Posted by Private Beach at 2:16 pm 4 comments:

We are seeing a bizarre proliferation recently of ever more pro-Beijing organisations seemingly dedicated to telling us that we are too stupid to choose our own leaders.  It appears to be a rule that these should have as long and unwieldy a name as possible.  Last night's news reported on a public forum organised by the Love China-Hong Kong Alliance of Youth Cultural Societies.  The main "youth" speaking at this appeared to be long-time Beijing lackey Ho Sai-chu (born 1937).  Of the other three youth representatives on the platform, one had grey hair, one was balding, and even the youngest-looking didn't appear to be less than 40.  From the brief shot we saw of what seemed to be a minuscule audience, few of them appeared to be younger than 80.  (Many old folks in Hong Kong treat these kind of public forums as free entertainment.)

So no youth there, and not much sign of Love either.  Are we really supposed to take these pathetic organisations seriously?
Posted by Private Beach at 3:18 pm No comments: 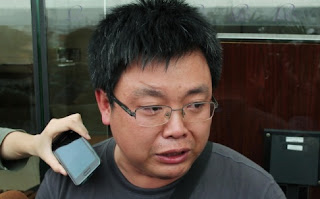 Did you see the mainland tourist on last night's news blubbing like a baby just because his tour bus was delayed by an hour?  Apparently this puerile display of over-the-top emotion was in support of his claim for compensation of RMB3,000 per head for the delay (the amount they paid for the entire 5-day tour to Hong Kong).  On that basis, New World First Bus owes me $750 for the agonising 15-minute wait I had to endure in Hennessy Road on Wednesday.

Song of the day here.
Posted by Private Beach at 3:54 pm No comments: