As genuine as a Louis Vuitton bag in Shenzhen

For the second day in a row, the South China Morning Post has run a story about Beijing's so-called Pamchen Lama, this time with a photo labelling him by that title as well.

For heaven's sake, this guy is no more the Panchen Lama than I am the Archbishop of Canterbury! Like many things that come out of China, he is a well-crafted fake. Any article on him should precede his title with the word "Counterfeit".

However, don't expect the Post to risk its business interests in China by telling the truth, any more than the eunuchs running South Africa who recently barred the Dalai Lama from attending a peace conference there.

P.S. To see how real journalism looks, compare the Post's fawning adulation of the young fake with the BBC's balanced coverage of the same story.
Posted by Private Beach at 1:24 pm 4 comments:

Panchen Lama back in spotlight, with praise for Beijing leadership


Well, there's a surprise! With its usual objectivity, the Post conveniently forgets to mention that the so-called "Panchen Lama" they refer to is not the genuine Panchen Lama recognised, according to Tibetan tradition, by the Dalai Lama - that one has been "disappeared" - but Beijing's fake substitute.

If the future of Tibet was not such a serious matter, it would be highly entertaining to see an avowedly atheist regime absurdly insisting it knows better than the universally recognised spiritual leader of Tibetan Buddhism who is the real Panchen Lama. I look forward to the death of Pope Benedict - it will be very interesting to see Beijing reject the Cardinals' choice of Pope in favour of their own "Patriotic" candidate pledged to breaking the Vatican's diplomatic ties with Taiwan.
Posted by Private Beach at 11:25 am No comments:

Does this ad in Hong Kong Craigslist irritate you as much as it does me?

We need a writer to post in HK Chinese and English to all the main HK forums and in multiple HK blogs as well.
You will be required to create new threads on forums and also reply to existing threads. The posting need to be from different accounts and should not sound like advertising to avoid the post being deleted.

We need 100 posts done in 7 days to start then it will be an ongoing job.

In other words, we want you to post a load of spam disguised as genuine contributions. I think you can guess my thoughts on this sneaky approach.
Posted by Private Beach at 12:00 pm 6 comments:

Something Is Happening Here But You Don't Know What It Is

Just went to Bob Dylan's official website to read the interview on his new album (coming soon). Then clicked on Media, Videos, and the first video offered, Like A Rolling Stone. Up pops a YouTube screen announcing "This video has been removed due to terms of use violation". Huh? Apart from the bad English (it should be "owing to"), are the copyright cops now so paranoid that even Bob Dylan isn't allowed to post Bob Dylan videos? This is getting ridiculous.
Posted by Private Beach at 1:07 pm No comments: 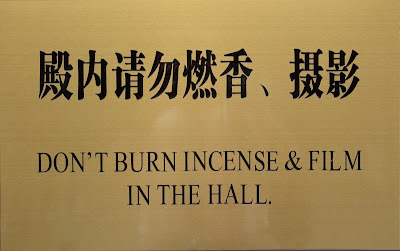 Sign at the Yonghe Lamasery in Beijing, showing how English grammar can confuse the unwary. Fortunately I was using my digital camera, so had no film with me to burn - though I have been known to burn the occasional photo to CD.

The lamasery was a former imperial palace donated to Tibetan monks by one of the Ching emperors - showing that Tibetan culture was once held in much higher regard in China than it appears to be these days.

P.S. I should of course have said "syntax" rather than "grammar". The sentence is in fact grammatically correct, but ambiguous.
Posted by Private Beach at 1:08 pm 1 comment: 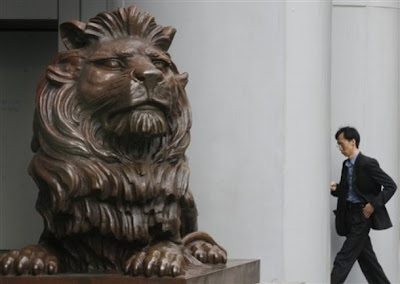 Passing the Hong Kong Bank building on a bus this morning, I observed that someone was assiduously polishing one of the iconic lions in front of it.

Nice try, but after the events of the past few weeks, I fear it will take much more than a splash of Brasso to refurbish HSBC's tarnished reputation.
Posted by Private Beach at 6:16 pm No comments:

The Chinese government has predictably denounced as "lies" the Dalai Lama's recent speech claiming that Tibetans in Tibet live in a state of constant fear - and just to make sure, it has dispatched thousands of troops and armed police to the region to imtimidate them into seeing things China's way.
Posted by Private Beach at 12:24 pm 1 comment:

Ever noticed that whenever you put a jug or mug of liquid in a microwave oven to warm it up, it always comes to rest with the handle facing away from you? Why, I wonder?
Posted by Private Beach at 11:10 pm 3 comments:

Email ThisBlogThis!Share to TwitterShare to FacebookShare to Pinterest
Labels: Questions

"Global problems are too big and too complex to be solved without female participation."
--Hillary Clinton

And a little more male participation wouldn't hurt, either....
Posted by Private Beach at 9:58 am No comments: