Hong Kong, 1 January 2015: the Hong Kong Beggars' Union today announced the signing of an agreement to equip its members with Octopus smart card terminals.  Commenting on the deal, the Union's Chairman said "Since the launch of the Octopus card, local people are no longer carrying much small change around in their pockets.  This has hurt our members' income, as they generally rely on the odd coin being dropped into their begging bowls.  This agreement will bring them into the hi-tech era and make it easy for donors to give with a simple wave of their card."

It is believed that the new terminals will also benefit Hong Kong's buskers.  However, it is feared that it will do little to improve their woeful lack of musical ability.

A belated Merry Christmas to my readers!
Posted by Private Beach at 6:52 pm No comments:

According to TVB news a few days ago, a new 180 km pipeline being built across Israel and the Palestinian territory to Jordan will carry "some 200 cubic metres of water per year".  The pipeline will cost US$400 million, which seems a little expensive to transport one eighth of an Olympic swimming pool's worth of water annually - until you check the story elsewhere and realise that TVB left six zeroes off the annual volume to be carried.  What a mistake-a to make-a!
Posted by Private Beach at 8:01 pm No comments:

In what is clearly an orchestrated campaign, a former government minister and a failed CE candidate have both suggested in the past few days that former Financial Secretary Antony Leung - who has suddenly re-emerged in public after a period of keeping a low profile - would make a good Chief Executive of Hong Kong.  Apparently the tycoon sector want to put someone of their own forward as an alternative to the presumed democratic candidate (if we're lucky) plus whoever gets the Beijing bootlicker nomination to replace the doesn't-have-a-hope-in-hell-of-re-election CY Leung - but they must be pretty desperate if they select someone who's already left the government in disgrace once.  Perhaps they think the Hong Kong public suffers from the same kind of memory loss that afflicted Leung when he raised vehicle taxes shortly after acquiring and apparently forgetting an expensive new motor, or perhaps they think Leung's fragrant wife compensates for his own shortcomings as a candidate.  Or - worst case scenario - they already know Beijing will put a block on any truly democratic candidate, and figure the Hong Kong public will respond by voting for anyone who isn't too visibly far up Beijing's backside, rather than the Party's anointed one.  Scary thought...
Posted by Private Beach at 9:45 am No comments:

This morning I received two emails from Standard Chartered Bank informing me that two payment transactions I set up online had failed (because I accidentally set the wrong "pay from" account) - on 25 November!  Did it really take them 3 weeks to notice?  The email might have been helpful on the day, but by this stage I had long ago noticed it on my last statement and rectified the matter already.  Is this their idea of real-time banking?!
Posted by Private Beach at 9:55 am 1 comment:

The Spoiled Brat of the South China Sea

In Britain, we liken this sort of behaviour to the spoiled kid who picks up the soccer ball and runs away with it because he doesn't like the way the game is going.  There is a well-established mechanism under international law for adjudicating on competing territorial claims.  If China is so confident of the validity of its claims to enormous chunks of the South China Sea, it should not be afraid to follow the rules, as the Philippines is doing in this case.  Otherwise we can draw our own conclusions.

[Story from South China Morning Post]
Posted by Private Beach at 9:51 am No comments:

The Contradiction at the Heart of the Government's Case

As Carrie Lam, Elsie Leung and other cheerleaders continue to argue for the government's stance on electoral reform, they also continue to gloss over the serious contradiction at the heart of it.  On the one hand they insist that any reform must comply with the Basic Law, which requires that a "broadly representative" nominating committee should nominate candidates for election by universal suffrage as Chief Executive of Hong Kong.  Most of us could live with that; the problem arises when they insist that the formation of the committee must also comply with the ruling by the NPC Standing Committee in 2007 that it be formed "with reference to the existing election committee" that selected CE candidates for the last "election".

According to those who are supposed to know, this means in Chinese legal parlance that the nominating committee, while it may be larger, should be of similar composition to the "four sectors" making up the election committee.  The difficulty here is that, other than those with a vested interest in the old system, no one in Hong Kong recognises the election committee as coming anywhere close to being "broadly representative"; in fact, the very opposite.  So if we have a nominating committee that follows the NPC ruling, we will not have one that is in any genuine sense "broadly representative" , and therefore it cannot be compliant with the Basic Law.

Apart from providing ample fodder for a judicial review, failure by the government to address this contradiction seems almost guaranteed to bring on Occupy Central.  Is that what they want?
Posted by Private Beach at 3:03 pm 1 comment: 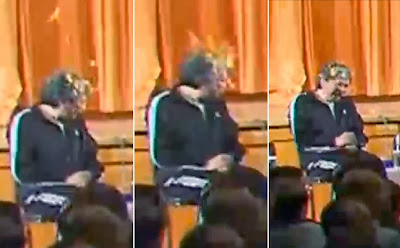 Memo to the person who hit Financial Secr5etary John Tsang with an egg at a recent public forum: don't waste good food on bad politicians.

Tsang's boss, Chief Executive CY Leung, for whom the missile was probably intended, subsequently said that "such incidents won't happen in mature democracies".  This is yet another factual inexactitude from a government that produces rather a lot of them - in fact throwing eggs, pies, paint, and more recently glitter, at public figures is a time-honoured tradition in many mature democracies, including the UK, France, Belgium, Canada, and of course the USA.  Notable victims have included Rupert Murdoch, Bill Gates and even the King of Sweden. 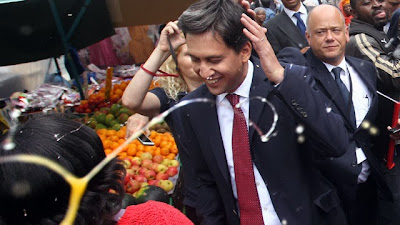 Despite claims that such incidents are immoral, violent, and even constitute terrorism, their intent is clearly symbolic rather than to cause physical harm (though in a few tragic cases, they may do so); the aim is to leave those who are perceived by the thrower as dishonest, immoral or self-important looking ridiculous, deflated and humiliated.  As such, most Hong Kong government ministers are clearly prime targets for such treatment. 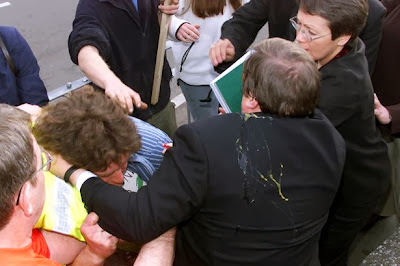 Posted by Private Beach at 2:45 pm No comments:

Yet another reason why the governance of Hong Kong is so bad: according to TVB news a couple of days back, while defending the government against a court case brought by a social welfare recipient, the government's lawyer said the government had "no specific policy objectives" for its private rental housing subsidy scheme.  So in other words, they are handing out our money with no particular purpose in mind...

I guess it's close enough to Christmas now to say "Bah! Humbug!"
Posted by Private Beach at 9:58 am No comments: