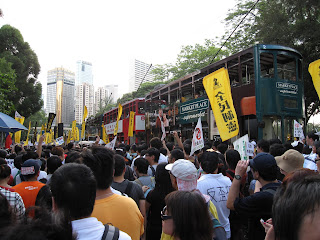 Weather permitting, I will as usual be on tomorrow's democracy march, unseduced by the many supposedly tempting alternative events arranged by the Voice of Pretending to Love Hong Kong and the other pro-Beijing puppet organisations that seem to be springing up everywhere like poisonous weeds.  But isn't it sad that the march has become an annual tradition?  How many more years do we have to protest before we get what the Basic Law supposedly promises us?
Posted by Private Beach at 6:35 pm 1 comment:

Posted by Private Beach at 2:57 pm No comments:

And speaking of ignorant fools in the government..,.

... no reader has yet claimed the prize for decoding Financial Secretary John Tsang's claim that Hong Kong's competitiveness declined because of internal economic growth.

Another recent survey also pronounced that Hong Kong has become less competitive compared with other Chinese cities.  However, since the same survey declared Macau the second most trustworthy city in China (yeah, that Macau - you know, the one with all the casinos and the current high-profile corruption trial), ahead of Hong Kong, I think we can be justified in having a few doubts about its methodology.
Posted by Private Beach at 2:38 pm No comments:

Rabid pro-Beijing propagandist Lau Nai-keung gives us another of his trademark rants (it would be excessively complimentary to classify them as journalism) in the China Daily.  Lau is worried that Trade Development Council Chairman Jack So has reassured the American business community that the planned Occupy Central movement will be just another peaceful expression of views, and unlikely to disturb "business as usual" in Hong Kong.  In Lau's eyes, this is an unforgivable departure from the official party line, as expressed by Chief Executive CY Leung a couple of days earlier, that the mild-mannered academics spearheading Occupy Central are planning mayhem, violence, rioting in the streets and general Armageddon.

'Even if Hong Kong has the "rule of law" and so forth, investors will still flee if our top officials are all ignorant fools' spouts Lau.  It only takes one look at the current government line-up to disprove this hypothesis - if Lau were correct, there would be nary a foreign investor left here already.  Still, credit to Jack So for being an exception to the rule and displaying a measure of calm reason amid the general hysteria.
Posted by Private Beach at 2:05 pm No comments:

Hong Kong's mass media do seem to take an awful long time to catch up with what's going on in the world.  Usually their readers are far ahead of them.  For the first few days of Edward Snowden's presence in Hong Kong, the Pro-China Morning Post was reprinting Guardian articles about him - and only got round to interviewing the man who was right under their noses when he approached them.

Now it's TVB's turn.  Last night's news led with an exposé of the fact that many overseas domestic helpers in Discovery Bay are living in the village just south of DB rather than with their employers as required by their contract. Since this has been going on for 25 years or so, it's hardly news.  Nor is it exactly "shock horror" material - while technically illegal, it suits both parties - the employers because they get more privacy in their limited living space at night, and the helpers because they probably prefer the opportunity to socialise with their counterparts rather than share a bedroom with a mewling baby.  So why the fuss?  Surely there are more important - and timely - issues to report on?
Posted by Private Beach at 9:43 pm No comments:

A small prize to anyone who can make sense of this report from last night's TVB news:


In regards to the decline in Hong Kong's competitiveness ranking, the Financial Secretary said this was due to internal economic growth.

That wasn't the only economic bollocks John Tsang was spouting in LegCo yesterday.  Following his claim that he was glad to see property prices had cooled down - "after rolling out the [government's market cooling] measures we see that they are effective" - it was, surprisingly, not the usual suspects who pointed out that the emperor had no clothes, but the usually pro-government Abraham Shek, who as representative of the Real Estate sector might be assumed to be not entirely averse to high property prices.

"Prices did not come down" admonished Shek, asking "What kind of success is that?"  Indeed.
Posted by Private Beach at 10:54 am 1 comment: