Posted by Private Beach at 12:24 pm No comments:

Does their compulsive urge to destroy beautiful vegetation stem from some deep-rooted childhood trauma over being forced to eat up their spinach or broccoli?

It's ironic that while the remnants of the Blair/Brown New Labour leadership in Britain continue to label Jeremy Corbyn unelectable, ordinary Labour voters - and many who had given up on the party but are now flocking back to it - are voting for him in droves in the Party's leadership election, making him the clear favourite to win.

The essence of "New Labour" was the concept that only by abandoning almost everything it stood for could the Labour Party get elected to power.  That worked for a while - in part because of the charisma and enthusiasm of the then young Tony Blair - but resulted in an administration that was effectively a more Euro-friendly Thatcher Light - continuing to turn nationalised industries over to greedy businessmen at the expense of ordinary consumers, removing in the name of deregulation anything that protected people from unscrupulous corporations, and slavishly following America's catastrophic foreign ventures.

These policies certainly attracted a sizable number of middle-class voters away from the Tories, but they alienated many traditional Labour voters who held fast to the Party's principles - particularly in Scotland, where the generally left-wing Scottish National Party succeeded in capturing much of Labour's electoral base.  Now with the LibDems as a credible alternative effectively wiped out by their ill-judged alliance with the previous Tory government, with Tony Blair and his former ministers facing probable intense criticism in the long-delayed Chilcot report on their role in launching the disastrous Iraq War, with UKIP nibbling away at the Tory vote on the other end of the political spectrum, and with the 2008 banking crisis and the subsequent Eurozone crisis making the "New World Order" appear positively frayed at the seams, the time may just be right for an "Old Labour" revival.

I've been out of the UK so long that I've lost my right to vote there, but I shall be watching developments with interest.
Posted by Private Beach at 12:57 pm 2 comments: 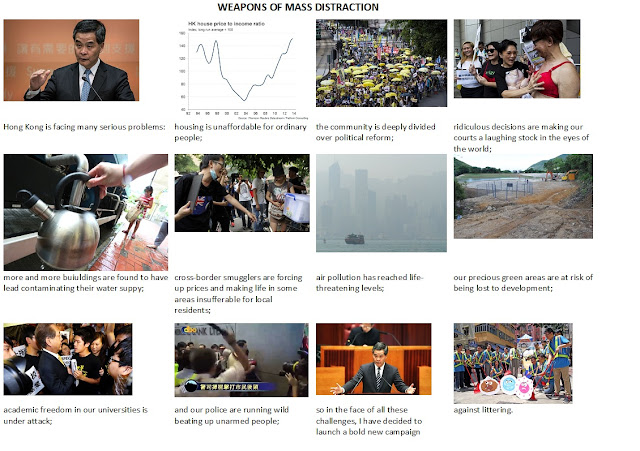 CY Leung plays Nero again with a big announcement at his last LegCo appearance - primed by an obviously staged question from DAB leader Starry Lee.  I'm as much in favour of clean streets as the next man, but doesn't the government have more important things to do something about?  Their problem is that genuine solutions to the real problems would require offending either their Beijing overlords or the tycoons who control our economy, so they are forced to fall back on sideshows instead to give the appearance of doing something.
Posted by Private Beach at 3:39 pm No comments: