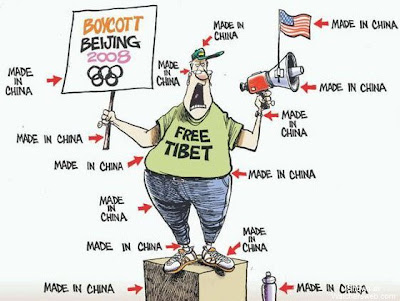 You may think this is exaggerated, but as so often in life, reality outstrips fiction: the BBC reports that Tibetan flags used by anti-Olympic protesters may have been made in China.

Most Olympic protests have focused on Tibet, but the South Korean leg of the torch relay highlighted another stain on China's grubby human rights record - the forcible return of thousands of refugees who have fled repression and starvation in North Korea to a regime which is known to imprison and even execute them on their return.
Posted by Private Beach at 10:16 am No comments:

"What does it mean to speak of child protection", asked Pope Benedict on his recent US visit, "when pornography and violence can be viewed in so many homes through media widely available today?"

It means that millions of people worldwide, unlike an alarmingly high percentage of Catholic priests, are able to enjoy erotica without being inspired to sexually abuse young children. The Church is supposed to aspire to higher standards, not blame its failings on society's temptations.
Posted by Private Beach at 8:28 pm 1 comment:

Stealing from the slightly richer to give to the poor

Trailer on TV for a coming current affairs programme (maybe the Pearl Report, but I wasn't really paying that much attention; this is from memory):

"Hong Kong's health system is breaking down under the pressures of an aging population and the rising cost of new medical technology. Who will pay to reform it, if not the middle classes?"

Uh-oh, what am I saying, forget I said that, don't even think about it.
This is Hong Kong.
Posted by Private Beach at 12:24 pm No comments:

Other bloggers such as Spike have already criticised the Standard's absurd piece by one Mary Ma attacking plans for protests against the Hong Kong leg of the Olympic torch relay. Leaving aside the missing apostrophes throughout, starting with the heading, (which could be blamed on the paper being unable to afford a competent sub-editor), what does Ms Ma have to say?

In an article that could have (and possibly did) come straight out of the Chinese government's propaganda machine, Ms Ma come up with some classic lines:


"The Hong Kong Alliance in Support of Patriotic Democratic Movements of China ... is selfishly promoting its cause at the expense of an event treasured by everyone."


How selfish to put the rights of a billion people ahead of those of a few hundred people running and tossing balls around!


"Has anyone in the alliance stopped to consider other peoples [she really doesn't like apostrophes much, does she?] right to being treated with dignity?"

Yet perhaps it is too easy to snipe at China's numerous blatant human rights abuses (and no, I am not pretending that the West is perfect by comparison, as my past comments here on other matters show). Despite all this, the fact is that the majority of Chinese people today enjoy greater freedom than at any time in their country's history. China, after all, emerged from feudalism as recently as 1911, only to go through decades of warlordism, foreign invasion, civil war and Maoist dictatorship, culminating in the madness of the Cultural Revolution.

At the dawn of the 1980s, Chinese people had few choices in anything - perhaps they could choose to wear identical outfits in either grey or blue. They could not choose what to buy - there was almost nothing in the shops anyway. They could not even choose to marry without permission from their work unit (which they also did not choose).

Deng's Open Door policy changed all that. Today Chinese people are free to choose their own job, start a business, decide what to wear, what and where to study, travel or study overseas, marry whom and when they choose. They can make money and decide how to spend it. They can build or buy their own home. While not everyone has yet benefited from the changes, it is easy to forget how much things have been transformed in China in a single generation.

Chinese people still do not enjoy many of the freedoms taken for granted elsewhere: the right to plan their family; to practice their religion freely; free access to information. Yet there has truly been a quiet revolution in China over the past thirty years. The problem is how to ensure that this process continues on the right path. China saw hosting the Olympics as part of that path to modernity; facing criticism and protest also comes with the territory.
Posted by Private Beach at 10:39 am No comments:

Living on the edge

As well as the UK, my recent trip took me to Prague for several days. Prague is amazing - simply one of the world's most beautiful cities anywhere. Many cities have attractive old centres, from Stockholm to Nara (and not forgetting our near neighbour Macau), but nowhere else have I seen such a massive concentration of beautifully preserved historic buildings over so large an area. Every corner you turn brings you to another architectural gem, some Gothic but most baroque in style. 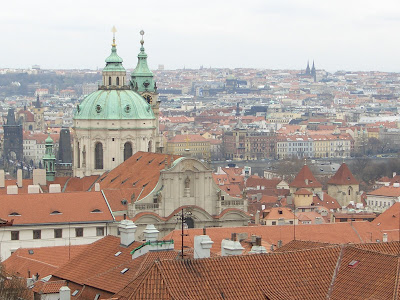 The city has a lot more to offer visitors than just great architecture: numerous classical concerts every day; an array of museums varying from the xublime (Mozart Museum) to the ridiculous (Museum of Sex Machines), from the educational (Museum of Communism) to the disgusting (Museum of Mediaeval Torture Devices); some good restaurants; and of course, some of the world's finest beer, from the people who invented pilsner.

One thing I found interesting was that, being British, I had grown up during the Cold War thinking of everything east of the former Iron Curtain as "Eastern Europe", and therefore out of the mainstream of European life. The Czechs, however, do not view themselves as East Europeans at all, but as living in Middle Europe, at the very heart of European civilisation - which, both geographically and historically, they are: 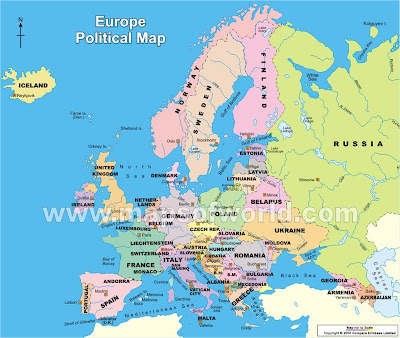 Now, apart from being an interesting study in varying perceptions, what significance does this have to us here in Hong Kong? Only that, while we see ourselves as being in a pivotal position within the dynamic Asia Pacific Region, from the perspective of Beijing, far to the north, we probably appear to be way out on the southern fringes, and therefore relatively unimportant in the greater scheme of things.
Posted by Private Beach at 10:13 pm No comments:

I'm Dreaming of a White Easter

No posts recently as I've been on a trip to the UK. It should be the beginning of spring there, but I woke up on Easter Day to this: 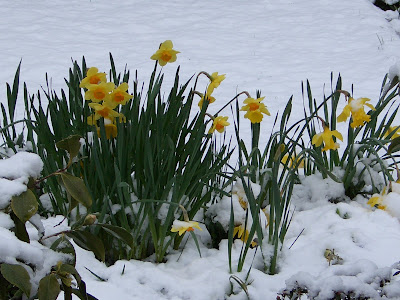 As spring approaches, a reminder to English girls: midriff-baring fashions and a beer belly are not a good combination.
P.S. If you think I'm exaggerating, read this. (Thanks, Fumier.)
Posted by Private Beach at 12:48 pm No comments: