Giving credit where credit is due

"It is unfair and irresponsible of the [British] government to put pressure on the public to spend in order to revive the economy."
--Rt Rev Stephen Lowe, Bishop of Hulme

As the worldwide recession deepens, governments everywhere are pumping taxpayers' money into failing banks to encourage them to keep lending to faltering businesses, while at the same time offering incentives to consumers to spend more in order to revive economic activity - spending the way out of trouble. Here in Hong Kong, there have been suggestions that the government should hand out $1,000 to every citizen to keep the economy ticking over.

Then ATV News a couple of weeks ago highlighted HSBC's chief economist and its local boss both arguing that consumer credit should be curbed, and announcing that the bank will raise interest rates on its credit cards. It is unwise, they tell us, to spend money you don't have.

Sound advice, especially when you don't know how long your job may last, and some of Britain's bishops have taken the UK government to task for not agreeing with it. But HSBC is one of the recipients of British government support to keep credit lines open, so it seems a bit disingenuous of them to be arguing the opposite case in Hong Kong. Not to mention that if the banks had followed their own advice, we wouldn't be in this mess in the first place.
Posted by Private Beach at 8:44 pm No comments:

Oh all right then, Merry Christmas!

As possibly the last blogger in Hong Kong to do so, may I wish all my 27 readers the very best for the current Christmas season (or whatever festival you celebrate around now) and the coming New Year. I was in Japan for a few days before Christmas (more on that soon), and am now marking 50 assignments from my Marketing students, so not much time to write lately, but normal (dis)service will be resumed soon. Cheers!
Posted by Private Beach at 12:44 pm 2 comments:

Stupid Is As Stupid Does

In well balanced public transport systems all over the world, taxis are seen as feeders to bus and railway routes, which do not offer door-to-door convenience but are far more fuel and space efficient in carrying large numbers of people over long distances.

However, this is Hong Kong. Our new taxi fare structure makes longer journeys cheaper per kilometre than short ones. Whatever this may do for cabbies' incomes, it can only encourage more people to make long journeys by taxi, increasing Hong Kong's already horrendous road congestion and air pollution.

I have argued before that the Hong Kong government has no concept of an integrated transport policy. This latest move once again proves me right.

This is not, of course, their only silly decision. I am a great believer in restrictions on smoking, but these have to be balanced against the right of smokers to choose to ruin their health so long as they do not inconvenience others. So why is smoking banned in Hong Kong's public parks, where the smoke has plenty of room to disperse, but allowed in the crowded streets of areas like Mongkok, where it is literally in your face? I think we should be told.
Posted by Private Beach at 5:28 pm 1 comment: 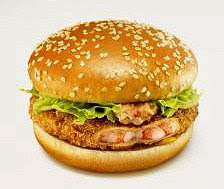 I don't often eat in McDonald's, but sometimes when I'm in a hurry and it's near, I'll take the easy option. So today I tried their new Ebi Burger, an import from their Japanese operations.

This, their advertising tells me, is made of carefully selected superior shrimps, and this is illustrated with pictures of succulent fresh pink shrimp. Only one mystery remains: how do they convert this into the near-tasteless rubbery grey mass that appears in the actual burger?

At least in some countries you can get beer with your burger...
Posted by Private Beach at 5:47 pm 2 comments:

Time Has (Not) Told Me 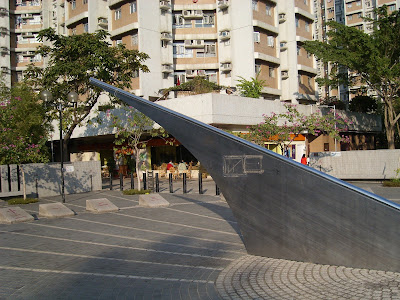 Just to reinforce Fumier's belief that our technology is somewhat behind the times out here north of the Red Lips Bar, here is the sundial in the park behind Eightland Gardens in Taipo. A nice design feature perhaps, but its reliability as a timepiece leaves something to be desired - the picture below was taken at 2 pm yesterday. 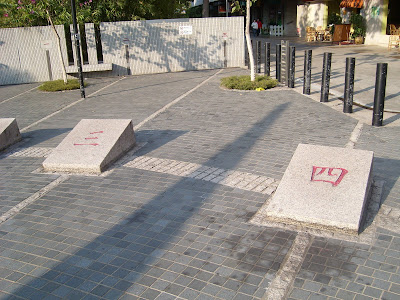 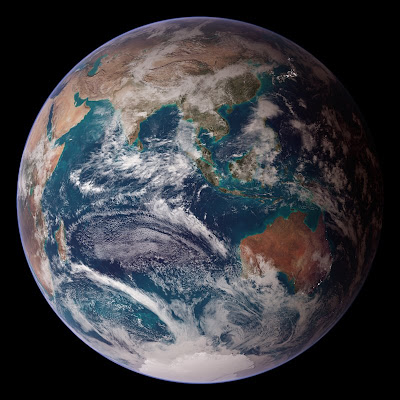 It's ironic to see the Hong Kong government trying to whip up a storm of patriotic excitement over the visit of China's astronauts to the SAR. If the view from space teaches us anything, it should be that all those lines between countries on the map don't really exist on the ground. We all share the same small beautiful blue ball of a planet, and it's about time we stopped playing "my bit is better than your bit" over it.
Posted by Private Beach at 3:52 pm No comments:

Enormously profitable TVB is nevertheless using the recession as an excuse to fire over 200 of its production staff. They could save just as much money, and do Hong Kong a big favour to boot, by sacking some of their overpaid "talent" instead. A good starting point would be to get rid of Eric Tsang's incredibly irritating voice, Nat Chan's inane grin, and a few of the legion of brainless bimbos who plague TVB's vapid variety shows like a swarm of locusts.
Posted by Private Beach at 9:45 am 1 comment: