Hoist on their own petard - or are we?

The recent visit to Hong Kong by Li Fei, chairman of the Basic Law Committee (BLC) of the National People's Congress Standing Committee (NPCSC), appears to have been primarily intended to let the Hong Kong public know the permitted limits of our long-promised democracy.  As a China Daily article by devoted Beijing acolyte Lau Nai-keung makes clear, what this means in practice is that Beijing will tell us in advance who we're allowed to vote for to save it the necessity of telling us after the election that we voted for the wrong person - a precaution Lau considers necessary because of Hong Kong's "disrespect towards Beijing's goodwill".

Unusually for anyone on the establishment side, Lau does acknowledge that the interests of Hong Kong and Beijing may not always coincide, a fact he describes as "embarrassing", though the only solution he offers is "a capable CE to keep both sides happy".  But how is this fantasy figure to be chosen?  While there has been talk of it being a legal requirement that any candidate "love China and love Hong Kong" in order to be qualified for election, no law has yet been devised anywhere that can mandate or verify love.

It appears from comments by another Chinese official,  Hao Tiechuen, that the required "love of China" may be ensured through loyalty to the country's constitution, presumably by requiring candidates to swear some sort of oath of loyalty - something he describes as an internationally accepted convention.   Hao is of course wrong in saying that loyalty to a country's constitution is generally a requirement for election in other countries - take a look at the Scottish Parliament, for example - only that changes to that constitution should be achieved through constitutional means.

The fundamental problem here is that the Chinese leadership itself does not live by what it proposes.  The Chinese constitution guarantees - in theory - human rights, freedom of speech, freedom of the press, freedom of demonstration, and property rights; all values dear to us in Hong Kong.  But not only do the authorities regularly ride roughshod over all of these rights in practice; and not only do the courts lack the power to overthrow a law as unconstitutional; but a substantial faction within the leadership regards the very concept of what it calls "constitutionalism" as a Western-imposed affront to "socialist" values [with Chinese characteristics, of course.]

So where does that leave Hong Kong?  In the contradictory position of requiring a potential leader to demonstrate loyalty to China's constitution in order to assure the Chinese leadership of his or her deference to them, while they themselves ignore the very same constitution with impunity.  You couldn't make this stuff up.

Many would agree that the local news is indeed chronic these days, but I think if I'd turned in that translation, my old French teacher, the diminutive but formidable (say that word the French way) Miss Adams, would have marked it "must try harder".
Posted by Private Beach at 12:51 pm No comments:

These are not the droids you're looking for

It appears that Chief Executive CY Leung has a new tactic for dealing with differing views.  Following his recent speech suggesting that the government had already explained the HKTV issue and we were just too dumb to understand it, last night's TVB news reported that "The CE also said thee were no more concerns about the plans for developing the Northeast New Territories".

As my wife said "Not for him maybe, only for everyone else in Hong Kong."  Still, if you can't solve the problems, pretending they no longer exist is an interesting alternative.
Posted by Private Beach at 8:00 am No comments:

Just a few days before Hong Kong's annual Gay Pride March attracted a crowd twice the size of last year's, it was reported that "the Liberal Party conducted a survey in which they found over 60% of the 1,200 respondents [as always with such figures, I wonder how this sample was selected?] objected to homosexuality and transgenderism".  Well, tough!  I object to typhoons, but that doesn't mean they don't happen.

In a city which is well behind the times in terms of waking up to equal rights, the result is hardly surprising.  What is sad is that instead of taking a lead in trying to enlighten the public, Liberal Party legislator Felix Chung endorsed the findings, describing these conditions as "anti-natural".  The reality, however, is that homosexual behaviour is observed in nature across a wide array of animal species.  Put simply, scientific observation tells us that like it or not, it is natural for gay people to be gay.  I am naturally attracted to women; Elton John is naturally attracted to men - that doesn't make either of us unnatural.

As for transgenderism, I suspect some of the prejudice here comes from simple-mindedness - many people want to slot everyone into two neat categories because it's easier to think that way.  But nature is not so precise - many babies are born with varying degrees of gender ambiguity, often "tidied up" surgically in infancy, though this policy is increasingly being questioned.  There is nothing new about this - one of our words for intersex individuals dates back to ancient Greece.  There have been notable transsexuals throughout history, including possibly a Roman Emperor and allegedly a Pope.  Some people may not even be aware of their true gender, as in a recent Hong Kong case.

So while some countries are amending their laws to recognise these realities, some Hong Kong politicians are still attacking natural phenomena as "unnatural".  This only demonstrates that the natural state of Liberal Party politicians is ignorance.
Posted by Private Beach at 4:49 pm No comments:

The East is Multicoloured 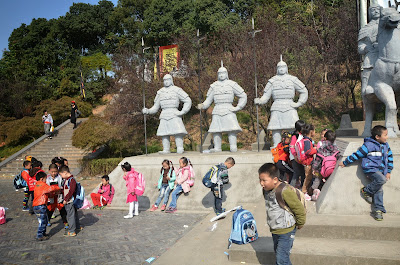 I took this picture of a group of Chinese children on a school trip to the Three Kingdoms City theme park in Wuxi a few days ago.  Looking at it this morning, I was reminded that not too long ago, every China tour involved two invariable stops: one at a Friendship Store (remember them?), and the other at a school where a bunch of kids dressed like this 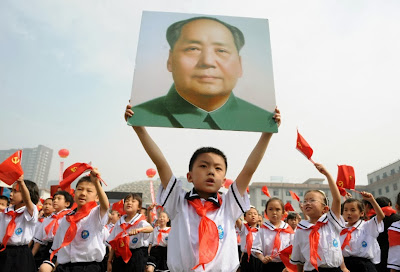 would sing songs such as "The East Is Red" glorifying the Communist Party and the "Great Helmsman" Chairman Mao.  [Pic borrowed from http://www.foreignpolicy.com/articles/2011/07/01/aint_no_party_like_the_communist_party]

One or two generations later, ignore the facial features and the kids in my pic could be anywhere from Sapporo to Sacramento.  While China today has many problems - massive pollution, widescale corruption and gross abuses of human rights - for the average Chinese person who does not challenge the (still nominally Communist) system, life has probably never been more colourful nor offered so many choices.

Posted by Private Beach at 12:33 pm No comments:

Cry "havoc!" and let slip the dogs of competition

The government continues to talk obvious nonsense about its decision to deny a TV licence to HKTV.  According to TVB news a few days ago, Exco Convenor Lam Woon-kwong "said a consultant's report showed that approving all three applications could have forced other stations to shut down, resulting in havoc in the television market".

Deconstructed into plain English, what this means is that if we allow a potentially more popular TV station to open up, it may attract so much advertising that it drives a less popular station out of business.  Imagine this absurd logic applied to, say, restaurants: "if we allow a new restaurant to open up and serve better food, people may stop eating at an existing restaurant which serves less tasty food".  That's not havoc; it's how markets are supposed to work.

Then there's Chief Executive CY Leung's convoluted statement yesterday, which I won't try to deconstruct because it makes no sense at all.  What he seems to be trying to say is "We've already told you the answer, so I'm surprised you don't get it.  Now stop asking the question"  This could represent a whole new tactic in keeping the public uninformed.
Posted by Private Beach at 1:58 pm No comments: 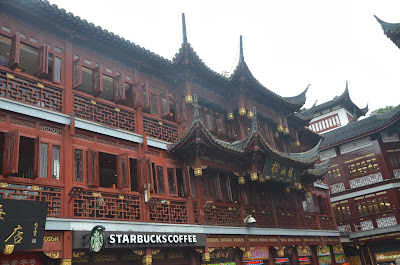 Shanghai: The American Concession
Posted by Private Beach at 9:43 pm No comments: