"Violent psycho paths can show empathy, says study" reports a headline on today's SCM Post home page.  But how do we know which paths are psycho and which are safe to walk?
Posted by Private Beach at 4:38 pm No comments:

Does anybody really know what time it is?

How come the Catholic "World Youth Day" event - now being held in Brazil - lasts a week?  What part of "day" doesn't God understand?
Posted by Private Beach at 11:30 pm No comments:

I don't often waste time reading celebrity gossip, but I happened to come across a 2011 piece on the "Top 10 strongest celeb couples".  The subheading is "CELEB LOVE THAT LASTS".  Well, sort of... for a while - at least two of the couples featured are no longer together.
Posted by Private Beach at 12:03 pm No comments:

"The honorary president of the pro-government Federation of Trade Unions [and Executive Councillor], Cheng Yiu-tong, has expressed support for a screening mechanism to be introduced for future chief executive elections.

He said that had happened overseas but it was something that Hong Kong people don't want to see here."

Well if they don't want to see it here, they won't vote for one, will they?  Duh!  That's how democracy works.

Posted by Private Beach at 9:20 am No comments:

Take your rubbish with you when you go

Now here's an idea.  It occurs to me the the 46 million annual mainland visitors to Hong Kong must be responsible for generating a substantial proportion of the SAR's 6.4 million tons of waste swamping our overburdened landfills each year.  So why not introduce a new policy: anyone who wants to visit Hong Kong has to take a 20 kg bag of rubbish back across the border with them when they leave.  This would remove nearly a million tons from the local waste stream, significantly extending the life of our landfills.

For most people, the impact of this flood of visitors is largely negative - overcrowding; luxury goods stores forcing out affordable local shops and restaurants and pushing up rents, causing a general rise in prices - so this way we could ensure that every visitor makes at least one positive contribution to our welfare.  And if it discouraged them from coming, well, only big landlords and luxury goods retailers would be greatly saddened.
Posted by Private Beach at 11:39 am 2 comments:

A Love Too Far 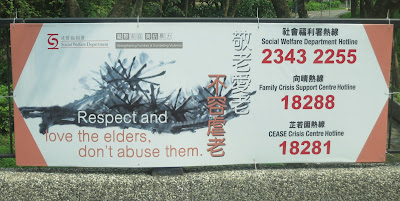 So let me see: I have to Love Hong Kong - no problem, but becoming increasingly difficult as more and more of the Hong Kong I love is under threat or disappearing.  Love China - hmmm, let's see.  It's not my motherland, but I do appreciate the great architecture, art, food and magnificent scenery.  Not so fond of the repressive government, environmental degradation, adulterated milk, secret prisons, corruption, and censorship.  I find it easier to Love Democracy ("the love that dare not speak its name" as far as the Chinese government is concerned).

Now it seems I have to Respect and love the elders as well.  Isn't this taking the whole love thing a bit too far?  I hope I treat everyone with the respect they deserve, but do I really have to share my limited supply of love with every cantankerous old wrinkly in Hong Kong? 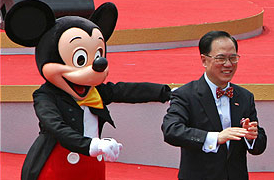 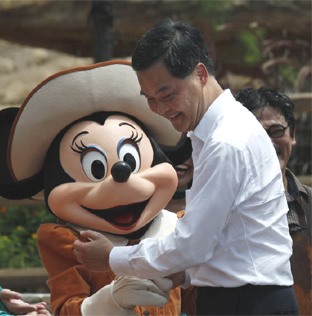 The more things change, the more they remain the same...
Posted by Private Beach at 11:12 am No comments:

Interesting that the BBC news obituary of the late journalist Alan Whicker (famously parodied by Mony Python) should include this photo: 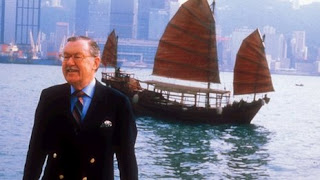 - though one does wonder from the sloping horizon and lack of focus whether the photographer was drunk!
Posted by Private Beach at 10:20 pm No comments:

it is not uncommon for me to splutter with indignation when watching the news, but last night brought an even bigger splutter than usual.  Chief Executive CY Leung told LegCo yesterday that Hong Kong is not yet ready for public consultation on political reform (i.e. the arrangements for the CE election in 2017) because "it is necessary to listen to different views before starting the consultation", and "there is still no consensus" on the issue.  The whole purpose of having public consultation is to give members of the community a chance to express different views on an issue - so does that mean the government needs to consult the public before it can consult the public?!

And as for consensus, there isn't and probably never will be a real consensus on the issue of democracy.  There are simply two fundamentally opposed camps - those (the majority) who think democracy is long overdue, and those who just think what Beijing tells them to (or worse, what they think Beijing wants them to).  The closest we can get to consensus will be a political framework that gives Hong Kong people as much say in their own future as possible, while reassuring Beijing that Long Hair will never be elected CE.  Achieving that would be greatly helped if the Rita Fans and Maria Tams of this world would spend less time telling us what Beijing won't let us have, and more time using their close links with the Chinese leaders to let them know their fears are unfounded.  But then, nobody ever earned a Grand Bauhinia Star or whatever it's called by speaking truth to power, so I don't see much chance of that.

Another piece of vintage political BS came from DAB leader Tam Yiu-chung a few days ago.  Commenting on several proposals for a political framework put forward by The Alliance for True Democracy, he said "the DAB fears the proposals may not be acceptable to Beijing because the different sectors of the community may not all be represented".  Now since the DAB has never shown much interest in inclusiveness, I think we can take it that he wasn't overly concerned that transgender vegetarian unmarried mothers who ride bicycles would not be fairly represented.  What he really means is that the proposals would destroy the current rigged system whereby pro-Beijing groups and other conservative forces such as the property and banking sectors and the NT Mafia are grossly over-represented in Hong Kong's political structures.  Which is exactly the point, of course.
Posted by Private Beach at 2:05 pm No comments:

Well, I never made it to the democracy march yesterday - other obligations intervened - but I was glad to see a good turnout despite the rain.  But how good exactly?  I have written before about the vast gulf between the organisers' estimates of the number attending protests and the official police estimates.  Now it seems the police have a new tactic for underestimating the level of discontent in Hong Kong - they now give figures for a protest "at its peak".  Yesterday their figure for this was 66,000.  While I treat the organisers' attendance estimate of 430,000 with some scepticism, the police figure is essentially meaningless.  Since it was reported that people were still pouring into Victoria Park to begin the march when the first ranks had already reached the end point at the Central Government offices, the peak figure tells us nothing about how many people actually participated, which is what really matters.  You might as well estimate the number of people having lunch in a 100-seat restaurant as "100 at its peak" without taking any account of turnover - completely ignoring the fact that each table could be occupied by 2 or 3 consecutive groups of diners during the lunch period.
Posted by Private Beach at 11:05 am No comments: