On Christmas Eve I looked in Oliver's for Stone's ginger wine, the traditional Christmas tipple (even my resolutely teetotal grandmother used to partake of a drop at Yuletide, apparently persuading herself that it wasn't really alcoholic). Alas, everyone else had apparently had the same thought, since they had sold out, and I had no time to look elsewhere, having already drawn a blank at City Super. Then I made the mistake of popping into Toys"R"Us to get a little something for the nephews - again everyone else had the same idea, since the queue for payment literally stretched the entire length of the shop.

I always envy those organised people who are fully prepared for Christmas by the end of November - I am still sending out late Christmas greetings several days later (I suppose I could pretend to be Russian, since their Christmas is twelve days later) - anyway we were still putting up our decorations on Christmas Eve.

On Christmas morning I eagerly opened my email, expecting more greetings from my loved ones, only to be flooded by the usual crop of spam. The organ extenders seemed to have taken a break (they came out later in the day, having presumably been testing the efficacy of their products late into the night), but the Nigerian business proposals, "replica" (= fake) watches, Canadian medications and the like were all out in force. Perhaps the oddest was a message from one "Holly [how seasonal!] Connelly" saying, "I know that you'll be alone these holidays [wrong], what are you going to do? My advice is gambling. It's lots of fun!" No thanks, especially at an online casino I've never heard of.

Least seasonal, having perhaps dropped through a timewarp, was the spammer who suggested I order 10 special cigars as a gift for Father's Day - which was some time in the summer last time I looked. Since my father died of cancer from smoking (15 years ago yesterday in fact), cigars are just about the last thing I would give anyone for Father's Day - or Christmas for that matter.

Things could only look up from there - until I bit on a staple in my fried rice at lunchtime. Then in the afternoon I went out into the garden, only to find that our little lotus pool (the ceramic type that sits on a stand) had completely dried up. I suspected a leak, but since I refilled it the water has stayed in. It could, I suppose, have been caused by a mini-tornado sucking out all the water, but since there were no reports of any strange weather phenomena over Christmas, my theory is that Santa's reindeer drank all the water the previous night.

After that, the rest of the day was actually quite enjoyable. The 3-year-old nephew was pleased with the toy plane we gave him, until another aunty and uncle gave him a talking toy bus from Japan, when he quickly lost interest in our less sophisticated offering. And the 1-year-old detested his wriggly toy snake and kept throwing it to the floor to get rid of it.

So what sort of Christmas did you have? Anyway, Merry Christmas to my dwindling stock of readers!
Posted by Private Beach at 4:54 pm 2 comments:

As the great Climate Change Conference opens in Copenhagen, one of Hong Kong's TV stations (I can't remember which) used the term "climate change deniers" in a news broadcast.

This is a singularly unhelpful term in the context. It is clearly intended to resonate with the term "Holocaust denier", but we are dealing with a very different phenomenon here. The Holocaust is a historical fact, attested to by thousands of reliable witnesses who survived Hitler's death camps, the testimony of Allied forces who liberated them, the confessions of camp guards, and numerous Nazi historical documents. Those who deny that it occurred are either deluded loonies, or more commonly evil racists seeking to whitewash the reputation of the Nazi regime.

Climate change is not a solid fact in this sense. It is an interpretation of masses of statistical observations, which means that more than one interpretation is possible. The majority of climatologists concur on it, but those who do not are better described as sceptics than deniers. In fact there are several levels of interpretation at work:
The fact is that propositions 1 through 3 above are generally agreed to be the best interpretation we have of the available data, but they are not "facts" in the sense that the Holocaust is. In the nature of scientific method (something sadly misunderstood by most laymen), they are open to challenge and alternative hypotheses. The debate will and should continue, and it is neither fair nor logical to stigmatise those who do not share the prevailing view as "deniers". ( I was intending to compare this scientific debate with those over the tobacco/cancer and HIV/AIDS findings, but will save that for another day.)

What does this mean for proposition 4? In my view, regardless of the fact that climate change may eventually be disproved, we should continue to act for now as if it is a proven fact. If it turns out to be a false alarm, we will have at least cleaned up much of our atmospheric pollution and developed new cleaner sources of energy, while doing no harm. If not, our actions now may make the difference betwen the survival and extinction of the human race.
Posted by Private Beach at 11:12 pm 2 comments: 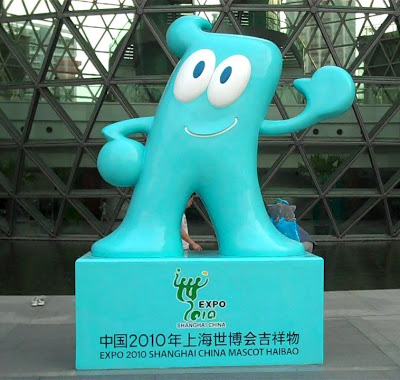 For those of you who haven't yet encountered it, here is the mascot for the Shanghai 2010 Expo, as mentioned in hkorbust's comment on my previous post. It looks to me like one of those friendly nano-characters in commercials for cleaning fluids that chase away the nasty germs lurking in your kitchen and bathroom. Or does anyone have a better idea?
Posted by Private Beach at 7:21 pm 2 comments:

What Becomes a Leg End Most? 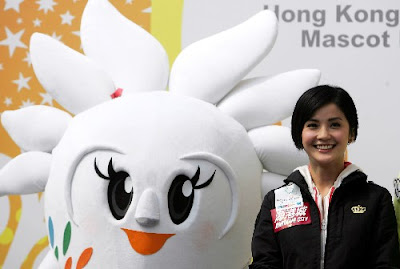 Well, the East Asian Games have started, and I hope they go well - and of course that Hong Kong performs well. But I am still waiting for someone to tell me what the Games' slogan is all about.

Be The Legend.
Be the what? First of all, who is it addressed to? If it's to the people of Hong Kong, how can we be the legend? A slogan is not enough - we need an instruction manual to go with it.

If it's to the athletes, well I wish them luck, but I very much doubt we're going to see any real sporting legends here. A true sporting legend is someone who dominates their sport internationally and sets the benchmark that others aspire to - and if they have a dash of charismatic flamboyance in their character, so much the better. Think W.G. Grace, Pele, Tiger Woods, Martina Navratilova, Muhammad Ali, Jesse Owens, Lance Armstrong, Michael Schumacher, Torvill and Dean.

No doubt we will see some keen competition here this month, but I don't expect much of it to be of that class. Which is not at all to disparage the efforts of those who do their best. Hong Kong may not have raised any global sporting legends (yet), but we have had our local sporting heroes, a couple of them world class: Lee Lai-shan, and probably our finest current sportsman, Wong Kam-po.

Anyway, good luck to all the competitors - but next time, give them a better slogan. And those mascots are pretty silly, too...
Posted by Private Beach at 11:04 am 6 comments: