Posted by Private Beach at 7:50 pm No comments:

Posted by Private Beach at 2:25 pm No comments:

It’s Good News Week! (and blame the ref for the bad news) Watching the news these days is usually a depressing experience, as Donald Trump continues to insult America’s friends and embrace its enemies, the UK continues to lurch like a lame lemming towards the fecal morass of Brexit, and human rights are increasingly under threat everywhere from Venezuela to Vladivostok – via Hong Kong.  However, the last week or two has been unusual in that there have actually been a few items of good news for a change.  For one, Liu Xia was finally released from house arrest in China and allowed to leave the country.

Meanwhile in Thailand the 12 young lads and their football coach trapped in a flooded cave complex were all safely rescued.  What made this case particularly heartwarming was that experts came from all over the world to contribute to the complex but finally successful operation to save the boys.  In a world full of division and strife, it is refreshing to see people cooperating across national borders to help others – that’s the way the world should work.

And until the semi-final, the unexpectedly successful run of England’s football team in the World Cup was – if you’re English – another cause for celebration.  Then they had the misfortune to come up against not just the mighty Croatian team but the Turkish referee Cuneyt Cakir, who provided some of the worst refereeing I’ve ever witnessed in a major tournament.  In the early stages of the game, Croatian players went on an orgy of pushing, shoving, tripping, obstruction, elbowing and shirt-grabbing, much of it directed at England captain Harry Kane, and all of it ignored by the ref.  If he had stamped his authority on the game at this stage, who knows how much more Kane could have achieved with more room to move, rather than being hemmed in by a string of fouls?

When Cakir did eventually get around to booking a Croatian player, the commentator was convinced that he’d picked the wrong one (though the correct one picked up a yellow card later).  And if the ref’s objective was to keep the game flowing by ignoring minor transgressions, then why did he stop play for one foul on an England player when England still had possession and were charging forward, instead of applying the advantage rule?

But perhaps Cakir’s worst error was to give Croatia a goal kick when video coverage clearly showed that England should have been awarded a corner.  A quick look at the VAR would have made this obvious, yet Cakir was oblivious – as he generally was throughout the game – to all pleas, entreaties and complaints.  A truly shoddy performance which has rightly attracted heavy criticism (and accusations of bias) online.

None of which is to say that England would necessarily have won under a better official – it’s too easy to blame the referee for a loss.  England certainly made mistakes, and when not testing the limits of the rulebook the Croatian team – especially Luka Modric – played some magnificent football.  Yet England’s young team, under the superb management of Gareth Southgate, went far further in this tournament than anyone expected, playing intelligent football with passion, commitment to the very last minute of the game, and strong team spirit without a trace of a superstar ego.  They are still maturing, and I look forward to seeing them do better in future tournaments – under a different referee.

Posted by Private Beach at 6:13 pm No comments:

Leaving from the front Exactly according to the script 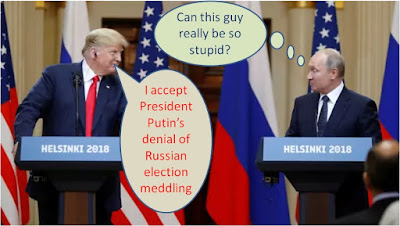 See yesterday's post for the script.  Only one question remains: is Trump really the naive total idiot he appears to be, or a very cleverly disguised covert Russian agent?

P.S. On second thoughts, "cleverly" is giving Trump too much credit.  Replace that with "thinly".
Posted by Private Beach at 1:22 pm No comments:

Sticking to the script

You may have assumed from Donald Trump's tendency to veer wildly off-topic and to make up his own facts as he goes along that his speeches are entirely spontaneous utterances.  In fact, everything he says is carefully scripted.  As proof of this, I received the following draft from a White House source who found it, in Trump's own distinctive handwriting, on a scrap of paper discarded in an Oval Office wastebin.  It appears to be part of Trump's preparations for his lovefest today with his puppetmaster Vladimir Putin. 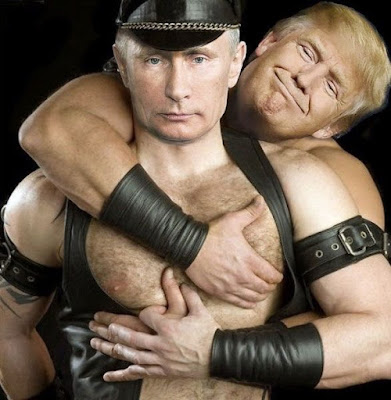 Trump: What's all this about Russia interfering in the US Presidential election?
Putin: Nothing to do with us - that's FAKE NEWS.
Trump: Great!  So that's all right then.
Posted by Private Beach at 3:40 pm No comments:

Story here.  It's good to see her free at last.
Posted by Private Beach at 5:04 pm No comments:

Alternative facts are such convenient things 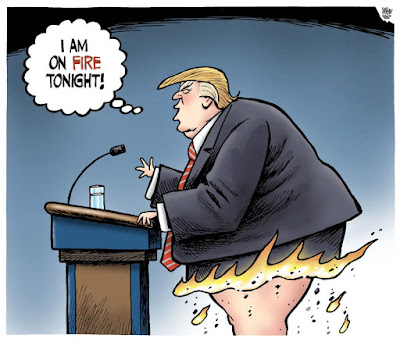 Donald Trump is notorious for inventing his own "facts" to support his arguments - such as the record-breaking crowds of invisible people at his inauguration, or the thousands of dead centenarians who begged him to bring back their sons' remains from North Korea.  It appears that his supporters share this tendency towards fiction - last night's TVB news contained a vox pop snippet from a lady called Tina Whittington, who asserted that: "The majority of Americans voted Trump in on his promise that he would elect [sic] and nominate a pro-life Supreme Court justice, and that's what he's done tonight."

On the face of it (leaving aside the irony - surely deserving of an in-depth psychological study - that Americans who identify themselves as "pro-life" are more likely to support capital punishment and oppose gun control) this is a plausible democratic argument.  The only problem is that the majority of Americans didn't vote Trump in - they voted for Hillary Clinton.   While the archaic quirks of the American political system put Trump in the White House, in reality he has no popular mandate for anything.
Posted by Private Beach at 1:30 pm 1 comment:

Is that how it's speld? 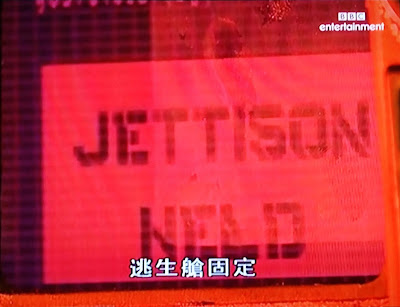 "Jettison Held" says the Doctor Who soundtrack.  Unfortunately someone in the BBC Props Department seems to need spelling lessons!
Posted by Private Beach at 11:35 am No comments: