ATV demonstrated the other day - not for the first time - that they desperately need a numerate news editor.  Reporting on plans to give new flu shots to elderly residents of care homes, Arthur Urquiola stated that "Some 200,000 doctors will be on hand to administer the injections".  According to government statistics, Hong Kong had 13,203 registered doctors at the end of 2013 - about 1 per 550 members of the population - so either our medical schools have been extraordinarily busy in the past year raising that proportion to 1 in 35, or there's something seriously wrong with ATV's figures.  Furthermore, with only 57,200 people in such homes, that many doctors seems a little excessive for the purpose.

Perhaps all those thousands of people on the streets with wheeled suitcases are visiting medical volunteers bringing in urgently needed vaccine supplies.  But in that case, what are they taking back home with them?  I think we should be told. 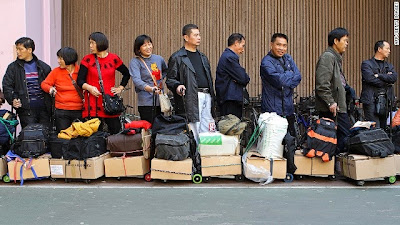 [Picture: CNN]
Posted by Private Beach at 7:54 pm No comments:

The wit and wisdom of Carrie Lam: 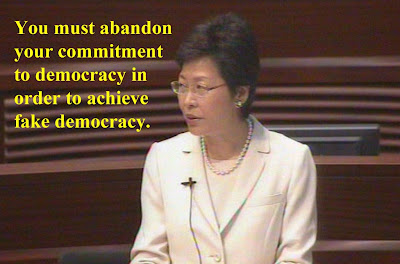 ATV News: "Chief Secretary Carrie Lam urged pan-democratic lawmakers who have vowed to veto the government's reform proposal to put aside their ideals in pursuit of democracy and support the plan." 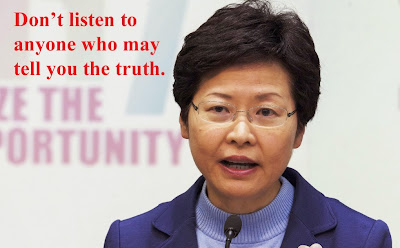 ATV News: "Lam shouted slogans and called on everyone not to listen to people who claim the package is not real universal suffrage."
Posted by Private Beach at 8:03 pm No comments: