How many shoe-shiners does it take to commemorate the end of a war? 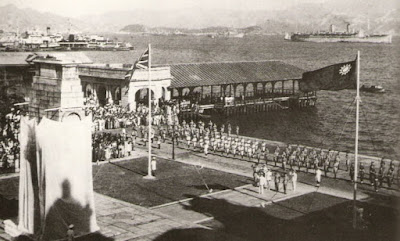 Almost 300, apparently.  Chief Executive CY Leung is leading a delegation of 296 handpicked Hongkongers to attend tomorrow's ceremony in Beijing at which the Chinese government will celebrate 70 years since the end of the Second World War and Japan's invasion of China by having large numbers of soldiers march around.  Presumably we - the Hong Kong public - are paying for this trip.

The list of those invited shows that most of them are the usual United Front suspects - from the Quat Doctor to the odious Robert Chow.  Some of them are multi-millionaires like James Tien and Allan Zeman who could easily afford to pay for their own tickets, though I doubt if they will be asked to.  A token 1% of the group is made up of representatives of the watered-down end of the pan-democratic spectrum, but the party as a whole is hardly a cross-section of Hong Kong society.

How many of these people, I wonder, bothered to attend the recent events marking Hong Kong's liberation from Japanese occupation - once a public holiday here - and paying tribute to those who fought and died for Hong Kong?  And how many of the few surviving warriors who fought for Hong Kong were invited to the event in Beijing? It would be nice to have a Hong Kong government that paid attention to Hong Kong occasionally, instead of being entirely focused on sucking up to the central government.