If you're thinking I haven't posted anything for a while, it's mainly because I was away in Europe for three weeks, and then didn't return to watching the news for a week after getting back to Hong Kong.

You can't imagine how gloriously refreshing it was to take a break from Hong Kong politics - not to be subjected to CY's robotic intonation of Beijing's latest nonsense every day; Rita Fan's gleeful smirk as she again tells Hong Kong people they haven't a hope of achieving their legitimate aspirations; Carrie Lam's forced smile as she again reads from a script she must know is rubbish, while dreaming of her retirement home in England (poor England!); Maria Tam gazing adoringly at Xi Jinping like a lovestruck groupie who's just won admittance to Led Zeppelin's dressing room; greasy Greg So and the equally oleaginous Rimsky Yuen peddling their latest line of Beijing-approved snake oil; obscure mainland academics who've never been near Hong Kong posing as experts on the place; the permanently angry Leticia Lee berating anyone who doesn't love the CCP, or who does love someone of their own sex; Robert Chow repeatedly trying to get in the Guinness Book of Records for gathering the largest number of dubious signatures on a petition; imported blue ribbon thugs; and all the rest of the unlovely establishment crew.

When leaving London I usually buy a decent bottle of single malt at Heathrow - a more expensive exercise every year.  This year it was Talisker Dark Storm, which cost me around £42.  Then in transit at Frankfurt, I noticed they had it at a special offer price of €44, so I picked up another bottle.  Out of curiosity, I checked the duty free price in Hong Kong on arrival - HK$730.  Let's compare: 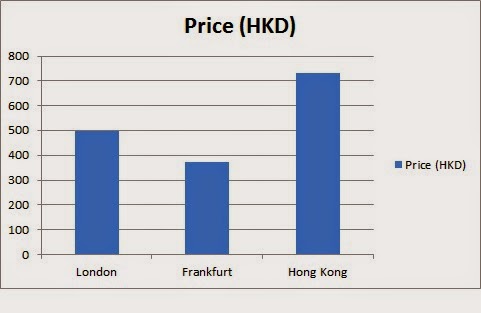 Then I did actually hear one bit of current news: the Hong Kong government, alarmed at the recent drop in tourist revenues, is planning a new campaign to promote Hong Kong as a shoppers' paradise - something it hasn't been for more than 20 years.  The irony here is that it's largely the overwhelming influx of visitors, mainly from the mainland, that has jacked up commercial rents to unprecedented heights, forcing prices up to far above paradisiacal levels.  So the government wants to attract more of them.

Anyway, here I am back in paradise...