Is this a Hong Kong Chinglish thing, or in today's digital world, do people no longer recognise any distinction between a physical location and an electronic one?
Posted by Private Beach at 12:11 pm 2 comments:

Big Man in Bed Gets Wed

Amid the heavier news of plunging stock markets, the report of the wedding of Manuel Uribe, the world's fattest man, came as light relief. But stories of these morbidly obese gargantuan eaters confined to bed always make me wonder about the role of their family. When the fatty first decides to stay in bed and asks for three breakfasts and a bedpan, why don't they just say, "Get up and get it yourself, you lazy bugger"? Wouldn't it save an awful lot of trouble?

For Uribe, there may be a better life ahead. Maintained on a strict diet by his new wife, he has already shed 250 of his previous 560 kilograms, and may in time be able to look forward to other pleasures in life than food.
Posted by Private Beach at 9:38 am 3 comments:

I always said spammers were stupid, but this one plumbs new depths of stupidity

Text of a spam email received this morning:
Posted by Private Beach at 2:29 pm No comments:

Shining city on a hill - just where it shouldn't be 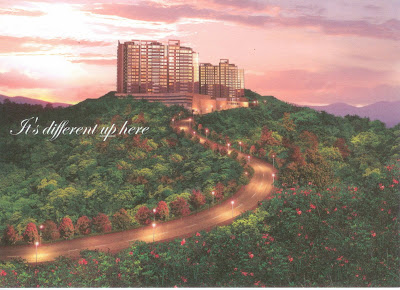 From the promotional material for Sun Hung Kai's new Park One development in Shatin (above), it appears that the Hong Kong government continues to learn nothing about planning.

Over the years, the Parkview development on Hong Kong Island has received a ton of criticism. While probably a nice place to live (unless your name is Kissel), with stunning views over Tai Tam Country Park, for everyone but the handful of wealthy residents it is an ugly eyesore that blights the view from just about every corner of the park.

Two decades on, and the government is still permitting developers to stain the countryside and ruin green views with massive hilltop developments that stick out like a sore thumb. When will Hong Kong be run for the benefit of the people and not the big property developers? (I know, silly question - when we get real democracy. Which may be why we don't.)

Not content with raping the countryside, Sun Hung Kai is taking liberties with the English language as well, by describing this as a "low-rise" development. Huh? To me, you, and most people, low-rise means 3 or 4 floors at most - something you can walk up without needing a lift. Far from being low-rise, Park One is about 50% higher than the building in Rotterdam that claims to be Europe's first high-rise. But then, SHK is the company that succeeded in changing the laws of physics.

Still, all is not bad news for the environment in Hong Kong. It was announced a couple of weeks ago that the disastrous Soko Islands LPG terminal plan will not go ahead. Cheers!
Posted by Private Beach at 8:19 am 6 comments:

Another insight into the personality of John McCain, currently bidding to become the first American President to have called his wife a cunt in public.
Posted by Private Beach at 10:38 pm 3 comments:

Do I Know You?

Ever noticed that the Rolex watch commercials on television don't bother to identify the famous Rolex wearers who appear in them (and are presumably paid a hefty sum for doing so)? Apparently it's assumed that the elite all recognise each other; if the rest of us hoi polloi don't know who they are, well, we can't afford a Rolex anyway, so that's our problem.
Posted by Private Beach at 8:18 pm No comments:

A Slip of the Scalpel

In his final campaign debate with Barack Obama, it sounded like John McCain started to say "we need to make health care avoidable", before correcting himself and saying "affordable".

But then, when it comes to health issues, surgical precision is not McCain's forte. Asked a few weeks ago whether the use of condoms was effective against HIV infection, he replied, "You’ve stumped me", before admitting he didn't know what his own position was on the issue!

This raises two possibilities. Either:
The second interpretation here might be inferred from McCain's use of the disparaging term "pro-abortion" in the debate, rather than "pro-choice". No one is "pro-abortion" - they simply believe, as Obama clearly and straightforwardly explained, that while abortion is undoubtedly a moral decision, it is not the government's moral decision to make, but that of the pregnant woman.

But then what else can you expect from a man who chooses as his running mate a woman who believes that the innocent victims of violent crime should be pubished for nine months - if the crime is rape resulting in pregnancy?
Posted by Private Beach at 6:55 pm 3 comments:

I envy those bloggers who seem to have time to live a life, hold down a job, and still write 5,000 words before breakfast. I guess they don't need much sleep.

No doubt some of them have already written a lengthy analysis of Donald Tsang's policy speech on Wednesday. I haven't studied it in depth, but I do have two short comments.

"This is not a time for innovation," declared Donald after the speech. Dead wrong! The system of unbridled self-interest that has dominated the world economy since the Thatcher/Reagan era (when greed was elevated from one of the seven deadly sins to the supreme virtue) has reached an ugly dead end with the current financial crisis, hopefully giving way to a new age of fairness and responsibility. Meanwhile Hong Kong's traditional role as China's gateway to the world is becoming redundant, as a newly confident China ceases to need an intermediary and deals with the outside world directly.

Given this situation, innovation - i.e. new ideas about Hong Kong's future role - is exactly what we need at this moment. Either that, or slide into irrelevance.

Donald's other mistake was in declaring that the minimum wage to be set under the long overdue minimum wage law - to be introduced in the coming year, no doubt acompanied by bleats of protest from employers - may still be insufficient for a wage earner to support a family without receiving additional social welfare assistance. If this is so, then what is the point? What this means in effect is that the taxpayer is subsidizing irresponsible firms that underpay their workers, giving them an unfair cost advantage over more responsible companies that pay their employees a fair wage. Great system, huh?
Posted by Private Beach at 2:02 pm No comments:

Would you buy a used bank from this man?

I didn't catch the whole story because it was on the Chinese channel, but this morning on the TV news there was some senior official from the World Bank talking about providing financial advice to developing countries.

Looking at the current state of the developed world's financial system, this seems a bit like the Pope giving advice on sexual techniques.
Posted by Private Beach at 10:07 am 1 comment:

According to the conventional wisdom, people are seeing their wealth eroded all over the world by the current financial crisis. Except they aren't; not really, because that wealth never existed.

Those things are real wealth. All the rest - bits of paper, entries in ledgers, magnetic impulses in computer storage - money, in other words - is fictional wealth; a set of symbols that we have agreed on to represent real wealth.

How did the human race get in a position where these symbols so dominate our way of life that their absence, or a disturbance in their supply, can threaten our access to real wealth? Where large numbers of people spend their working lives manipulating these symbols without adding one iota to the underlying store of real goods and (useful) services? Foreign exchnge dealers, for example, convert one set of symbols into another set, without adding to the value of the goods represented by those symbols (i.e. creating wealth) in the slightest.

In their greed, America's bankers forgot that money is only a symbol, and created more and more symbols in the form of subprime mortgages until their nominal value far exceded the real value of the houses they were supposed to represent. (Real value is essentially measured by what goods could be exchanged for in a perfect barter system.) They then packaged up these inflated symbols and passed them on to other greedy bankers around the world, who also wanted a slice of this largely fictitious wealth. Some of these in turn resold them to the public in the form of yet more dubious financial instruments such as Lehman's minibonds.

Finally reality intruded and it became clear the emperor had no clothes - these symbols did not represent anywhere near the value of the real wealth they claimed to represent. The result: banks left with insufficient meaningful symbols to meet their obligations; angry people demanding to know why they had been sold worthless symbols; and governments around the world pouring meaningful symbols (representing the labour of taxpayers) into financial institutions to rescue them from the consequences of their own stupidity.

So what next - back to barter?
Posted by Private Beach at 8:07 pm 3 comments:

To Sarah Palin's Image Consultant: telling your client to smile is not a bad idea, but not all the time! Intelligent Americans would like to see their potential president display a bit of gravitas, not an inane fixed grin. I'm sure she's got a good dentist, but it would be more impressive if she had a better grasp of the facts. For example, characterising Iran's president Ahmadinejad as a dictator is wrong on two counts: first of all, he came to power by winning a majority of votes from Iran's people, which is more than can be said of current US leader George W. Bush; secondly, the real power in Iran does not lie with him, but with the clerical leadership.