As most people know, Europe has "Protected Designation of Origin" laws designed to protect the names of distinctive local foods and drinks from being copied elsewhere. Champagne, for example, can only come from the Champagne region of France; and Newcastle Brown Ale could at one time only come from Newcastle, until its brewer applied in 2004 to cancel its protected status because they wanted to move the brewery across the river out of the city. (This is the same unlovely company, then called Scottish & Newcastle, that also closed its last brewery in Scotland, leading one writer to suggest that it should change its name to Ampersand, since that was the only valid part of the name left.)

Usually this system works well, though some names had already become so widely (ab)used that it was impossible to save them. Numerous inferior cheeses around the world bear the name Cheddar, for instance, though the finest examples of the style are still produced on farms around the Somerset village of that name.

Cheddar can at least still produce its local speciality, though not exclusively. Not so lucky is the Cambridgeshire village of Stilton, where the magnificent blue cheese of that name was first sold. The current landlord of the historic Bell Inn, where the cheese originally came to fame, commendably wants to sell locally produced blue cheese. Unfortunately for him, Stilton can by law only be produced in the three counties of Derbyshire, Leicestershire (where the Inn's owner in the early 1700s obtained his first supplies) or Nottinghamshire. So the Bell Inn can sell the product it is most famous for, but only under a different name. Crazy, huh?

Personally, as much as I love Stilton, I find Blue Wensleydale even more delicious, though often hard to find. That is, believe it or not, still made in Wensleydale.
Posted by Private Beach at 10:36 am No comments:

The Guardian newspaper in Britain is so notorious for its frequent typos that Private Eye long ago dubbed it The Grauniad. Just now I Googled "Matt Driscoll" (a British sports journalist) after reading about him in a BBC story. Driscoll challenged his harassment and sacking by Rupert Murdoch's now defunct News of the World newspaper after he fell ill, and won a court settlement of £792,736 - good for him!

But that's not the point of this story - what is, is the extract turned up by Google from the Guardian blog: "Matt Driscoll is now being taken [by Britain's Leveson inquiry into press ethics] through his 10 year stint at the NoW chronologically. He worked under sour editors - Phil Hall, then Rebekah Wade, ..." Well, it's hardly surprising they're sour after the revelations about the paper's shameful behaviour under some of them which led to its closure.
Posted by Private Beach at 5:18 pm 2 comments: Even worse (sorry for the poor picture quality): 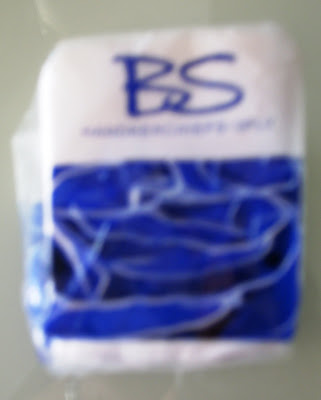 This is one of the packets of tissue they give away free when you buy a newspaper. They probably have to give it away - would you purchase from someone who tells you "Our brand is BS"?!
Posted by Private Beach at 6:42 pm No comments: