All that education and still stupid as sh*t 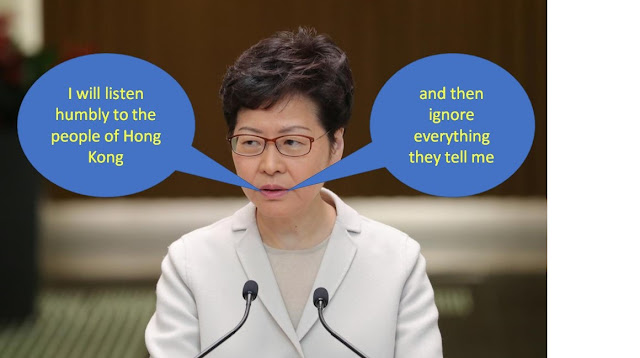 You have to wonder what is wrong with Chief Executive Carrie Lam.  She's supposed to be highly intelligent - invariably number one in class, head girl at school, educated at top universities in Hong Kong and the UK, years of experience as a senior civil servant - yet it is clear she is as out of her depth now as Bob Dylan's Mr Jones..  The two biggest mass protests ever in Hong Kong, and she doesn't get the message.  Six months of violent clashes, and she doesn't get the message.  Now the biggest electoral drubbing in history for the pro-government parties, and she still doesn't get the message.  Public opinion polls show her popularity rating at  unprecedented lows, and that more than half of Hongkongers have zero trust in the police, and - need I repeat myself?

Hong Kong voted massively for change, yet all Lam continues to deliver is hand-wringing, platitudes and empty promises.  For all her talk of listening humbly to the people, I think the problem is that humility is not in her nature.  Southern District Councillor Paul Zimmerman's analysis seems spot on: instead of thinking "the people have spoken; I must respond", her attitude is "the people are attacking me; I must fight back".  That does not bode well for Hong Kong's future.
Posted by Private Beach at 12:31 pm No comments:

The Eyes Have It 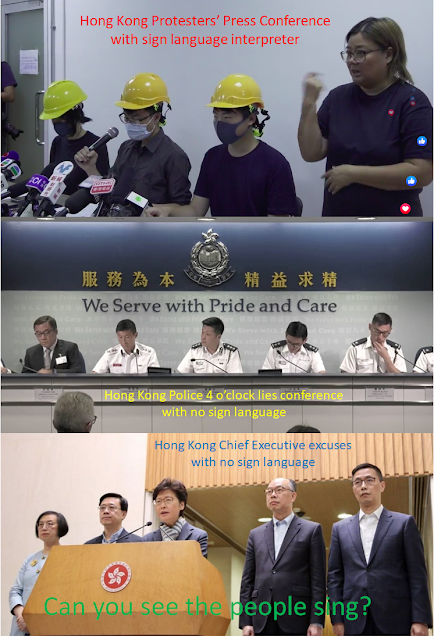 Posted by Private Beach at 1:33 pm No comments:

The Lesser of Two Goods 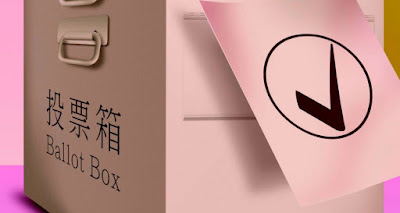 Tomorrow's District Council elections are being framed in some quarters as a gargantuan battle between the resurgent forces of democracy and the mighty Beijing United Front electoral machine, a chance to strike a blow against the powerful empire that is crushing Hong Kong.  Well, guess what, most District Council work is pretty humdrum stuff, more concerned with where rubbish bins and bus stops should be located than with the higher scheme of things.  Nevertheless, after months of violent protest the election does present a rare opportunity to raise one's voice peacefully against the DAB juggernaut and to demonstrate the Hong Kong government's near-total lack of support (as an aside, there is no silent majority supporting this clueless government - in fact, any politician anywhere who claims the backing of a silent majority usually lacks much real support).

What may surprise my regular readers is that I have decided, after much reflection, not to vote for the candidate of the democracy movement in my district.  Our constituency is largely rural, with a mix of traditional villages and upmarket estates, and has been represented for two terms now by a local man who is popular in the area.  As an indigenous villager, he has some connections with the Heung Yee Kuk, but his political stance is genuinely independent.  More importantly, he has done a good job for the district - I base this not just on his glossy election brochure listing the many projects he has been involvesd in (as Mary Melville's  comments here point out, some candidates will claim credit for just about anything that happens in their district, or even in neighbouring districts), but on experience.  My wife worked with him on a successful campaign against an unsuitable proposed development in the district, and has observed at first hand the effort he puts in.

Nothing against the "official" democracy candidate, who comes with the backing of various well-known pro-democracy figures, but he has no track record here (and his election leaflet misspells the constituency name; not a great confidence-booster!)  And ultimately, why do we want a more democratic system?  Not to make great gestures with our votes, but to select candidates who are dedicated to their job, care about their constituency, and who listen to and are responsive to their voters' needs and wishes.  We have that already in our constituency, which is why the incumbent will be getting my vote again.  Tell me if I'm wrong.

And by the way, don't worry if your ballot paper has a corner snipped off - it's not damaged, just a new feature to help the blind.
Posted by Private Beach at 11:48 am No comments:

Lord, what fools these ministers be! 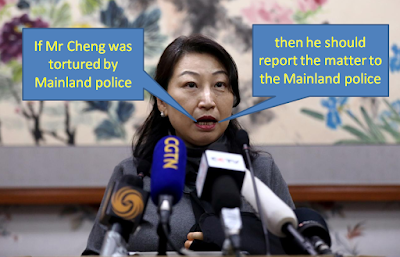 This is Hong Kong's "Secretary for Justice" - who decided that this would be a good time, in the middle of months of violent clashes on the streets of Hong Kong, to fly to London (presumably at the taxpayers' expense) to promote the territory as a centre for dispute resolution.  Truly, these people make satirists redundant.
Posted by Private Beach at 1:57 pm No comments:

Under its new boss, Chris Tang, the Hong Kong Police Force has decided to take my advice and adopt a new motto, reports the HKFP. Instead of being proud and careful, the Force has regretfully ignored my suggestion and will now be “Serving Hong Kong with Honour, Duty and Loyalty”.  Which sounds fine until you ask "loyalty to whom?"  Based on the events of recent weeks, the answer is more likely to be the Chinese Communist Party than the Hong Kong people.
Posted by Private Beach at 4:50 pm No comments:

Posted by Private Beach at 7:54 pm No comments:

Down to the banana republics 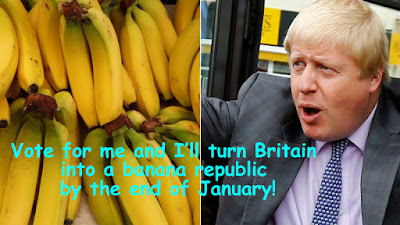 Posted by Private Beach at 5:26 pm No comments: