We Aren't The World

There is a tradition of American Presidential inaugurations attracting the greatest American artists to perform.  Previous inaugurations have featured such national musical icons as Frank Sinatra, Bob Dylan, Bruce Springsteen and Aretha Franklin.

Following in this tradition, Donald Trump has invited a host of American superstars to sing at his inauguration - Elton John, Celine Dion, and Andrea Bocelli.  Oh, hold on a minute...

Never mind, they've all reportedly declined the invitation anyway, though Trump has secured a couple of other American icons (and even some of the Rockettes are said to be unhappy about it).  I guess those sneaky Limeys, Canucks and Eyeties just don't want America to be great again.

(And whatever possessed whoever in Trump's team thought of asking Elton John, given the incoming Vice President's well-documented homophobia?)  Reportedly he may instead play at an alternative "not my president" concert in Miami.

Anyway, here's wishing a Merry Christmas to all my readers!

Posted by Private Beach at 11:42 am No comments:

When All Else Fails 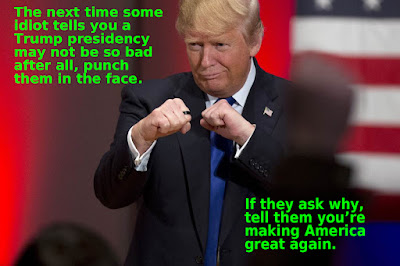 Posted by Private Beach at 5:49 pm No comments:

Facts are such inconvenient things 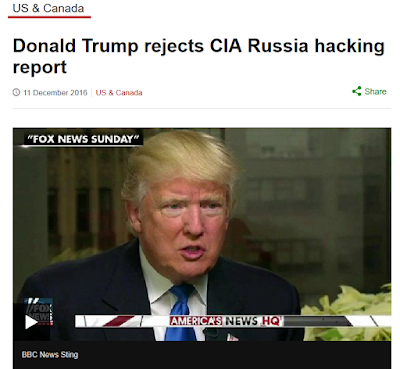 Donald Trump’s rejection of the CIA's findings probably stems from the same root as his invention of 3 million phantom illegal votes for Hillary Clinton. Trump knows in his heart, or what passes for one, that a substantial majority of American voters rejected him, and that while he has won the electoral college, he has no true mandate from the people. His enormous ego demands that he disavow any fact which would diminish his victory in his own estimation, hence the number of imaginary illegal votes he dreams up conveniently exceeds the 2.8 million vote margin by which Hillary defeated him in the popular vote. Anything else which would cast doubt on his win, such as the Russian hacks, must also be denied in order to feed his fragile self-esteem.

On a side note, it is questionable how long Americans will accept the continuation of the electoral college system. This was originally devised to ensure that any President enjoyed broad acceptability across many states of the young union, not just in a few populous ones. 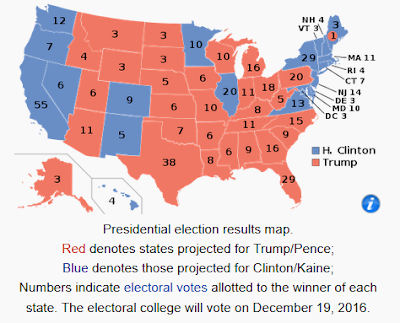 As the electoral map shows, this works – Trump won 30 states to Clinton's 20 – but America's demographics have changed dramatically since the system was put in place. As the country’s population becomes increasingly concentrated in a few heavily populated coastal states, such as California, New York, Texas and Florida, it is likely that electoral college wins which go contrary to the popular vote will become more frequent. We are already seeing the beginning of a movement to challenge the current system – "Not My President" – and Americans will increasingly ask why the will of the overwhelming majority of the people has to be frustrated in order to keep Wyoming and North Dakota happy.  Watch this space.
Posted by Private Beach at 7:59 pm No comments:

From Private Beach - the blog that brings you the news before it happens!


Thursday 15 December 2016 - Hong Kong was engulfed by a tidal wave of tedium today as New People's Party leader Regina Ip, at her long-awaited-with-disinterest press conference, finally announced what everyone has known for weeks that she was going to say.
Posted by Private Beach at 9:42 am No comments:


Following his successful request to the High Court to unseat two young Legislative Council members on the grounds that they had not taken their oaths of office with due sincerity, Hong Kong’s Secretary for justice Rimsky Yuen today announced that the government is applying for a judicial review against Chief Executive CY Leung on the same basis. Explaining the move, Yuen stated: “The CE has sworn allegiance to the Hong Kong SAR, but his actions in office clearly demonstrate that his true allegiance is to the Chinese Communist Party, heedless of the interests of Hong Kong.  This places him in obvious breach of the NPCSC’s recent interpretation of the Basic Law, requiring oaths to be taken sincerely.”

“Furthermore,” Yuen continued: “Article 43 of the Basic Law states that the CE shall ‘represent Hong Kong’.  Having been elected by only 689 votes, and with his support ratings consistently running well below 50%, the CE is also unable to fulfil this requirement.  Accordingly we shall be asking the Court to declare his office vacant.”

Yuen was at pains to point out that this decision was made purely on legal grounds, with no political considerations being taken into account.
Posted by Private Beach at 10:05 pm No comments:

Fact: the only person charged with illegal voting in the recent election was a Trump supporter.
Posted by Private Beach at 10:26 am No comments: 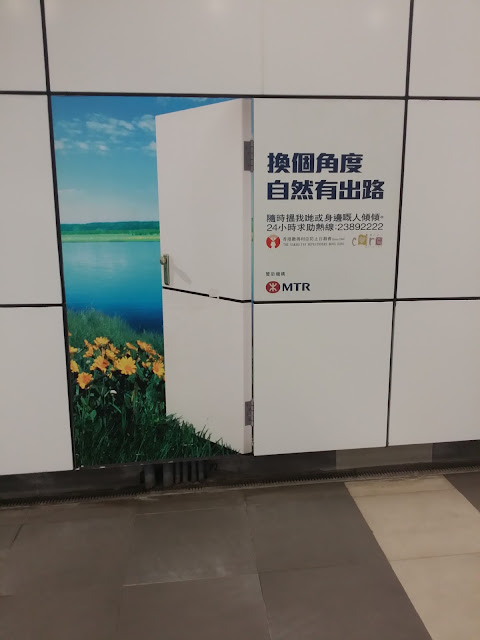 For many months, I regularly passed by this charming trompe l’oeil doorway into a peaceful country scene at Tai Po Market railway station.  Then one day recently I came by and it was gone – just a long section of featureless white wall where it used to be. 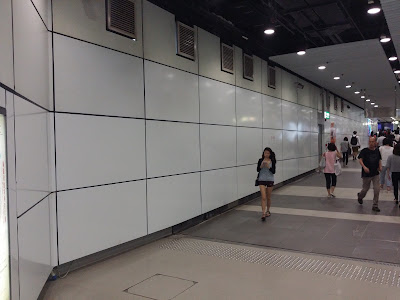 I feel oddly bereft – as if I had pushed my way through the heavy coats to the back of the wardrobe, only to find that the entrance to Narnia was no longer there.  In a world where the likes of Donald Trump and CY Leung can ru(i)n our lives, we all need a doorway to a better world – however imaginary.
Posted by Private Beach at 11:35 pm No comments: 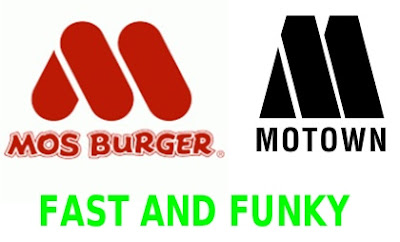 Posted by Private Beach at 11:20 pm No comments: