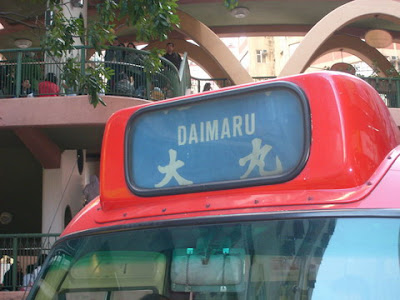 Every day, hundreds of minibuses on Hong Kong Island travel to a destination that doesn't exist. For years, red minibuses terminated at the Daimaru department store in Great George Street, Causeway Bay (the terminus is now in nearby Sugar Street). The store closed in 1998, but a decade later, the minibuses still advertise it as their destination. Locals know where they mean, but it must confuse the hell out of tourists (maybe that's the intention...).

Meanwhile up in Taipo, green minibus passengers still request to be let off at "Kah Si Bah", though the Carlsberg Brewery in the Taipo Industrial Estate closed in 1999, and the local market is now supplied from Carlsberg's mainland breweries.

Does anyone know of any other ghost destinations in Hong Kong that linger on in this way?
Posted by Private Beach at 6:54 pm No comments:

Message in a Yahoo group I belong to (dated 17 January) promoting "replica" (i.e. fake) watches and the like:

"We sure, that you are looking for Christmas gifts.

Hurry up! The best gifts and huge price break only in our Christmas store!"

Well, doesn't everyone do their Christmas shopping in January?
Posted by Private Beach at 10:49 am 1 comment:

Two sides to every freedom

For the 14th year running, Hong Kong has been named the world's freest economy, ahead of Singapore in second place. This title is bestowed by the Heritage Foundation, a right-wing US-based organisation.

The Foundation warns, however, that Singapore is closing the gap. But before we all panic that Hong Kong is no longer competitive, let's look at some of the Foundation's criticisms and translate them into plain English:

Here's a question: if Hong Kong's economy is so free, how come we only have two big supermarket chains?
When big business calls for deregulation, what they really mean is usually dismantling worker protection, dismantling environmental protection, and dismantling consumer protection so they can enlarge their already bloated profits. Do we really want to be more "free" in this sense?
As for comparisons with Singapore, the Heritage Foundation says nothing about political freedoms. Even without democracy, we are streets ahead of the Lion City in terms of freedom of expression.
Posted by Private Beach at 6:38 pm 3 comments:

The rise of the machines

Am I the only one who, on seeing people walking around with Bluetooth mobile phone headsets seemingly permanently attached to their ears, is irresistibly reminded of the Borg in the later Star Trek series?

How far will man/machine hybrids go? We already have thousands of people walking around with artificial pacemakers and plastic hip joints. That's fine, but now there are proposals to insert a computer chip into convicted criminals (as we already do to dogs). And you would have to be very naive indeed to think that governments will be content with only chipping criminals - all in the interest of preserving our freedom by destroying it, of course. Welcome to 1984.
Posted by Private Beach at 3:14 pm 1 comment:

I was watching an old episode of "Cheers" last night in which Frasier Crane persuades likable but slow-witted bartender Woody to run for the City Council for a bet. Briefing Woody before a debate with his opponent, Frasier concludes his advice with, "... if that doesn't work, just say the word 'change' about a hundred times".

Now, does that remind you of anyone?
Posted by Private Beach at 10:14 am No comments:

The Times of London (once a highly respected paper of record, but nowadays owned by Rupert Murdoch) discloses that controversial billionaire George Soros, an opponent of the Iraq War, partially funded the 2006 study that estimated the number of deaths attributable to the war as 650,000. The accuracy of this figure was fiercely criticised at the time, and a more recent study puts the number of dead at "only" 151,000 (still 151,000 too many).

The Times article quotes Michael Spagat, economics professor at Royal Holloway, University of London, as saying "The authors should have disclosed the [Soros] donation and for many people that would have been a disqualifying factor in terms of publishing the research". This only shows that "many people", including Spagat, are stupid.

The source of funding of a scientific study, though it may warn us to be wary of a possible hidden agenda, says nothing in itself about the validity of the study's results. If the survey is conducted honestly and the methodology used makes sense, why should the fact that person A rather than person B paid for it make any difference? Apart from which, who is going to fund such studies apart from opponents of the war? The war criminals in Washington, London and Canberra who started the war have done their best to avoid and obfuscate the whole issue of the resulting death toll. Soros deserves credit for helping to bring the historical facts into the open.
Posted by Private Beach at 4:57 pm 2 comments:

Last night's crash between two Macau ferries should never have happened. Sure it was foggy, but a) those vessels carry radar; b) there are well-established rules of navigation designed to avoid collisions; and c) common sense says that if you can't see far ahead, you should slow down. Conclusion: unless the Marine Department investigation turns up something surprising, the most likely reason that 140 people were injured is either incompetence, carelessness, or both on the part of one or both crews.

That was not the only accident in local waters yesterday. Hong Kong's loony drivers are dangerous enough; it would be nice to be able to take a ferry to Macau without worrying that there may be an idiot at the helm, or steering another vessel in the vicinity.
Posted by Private Beach at 9:09 pm No comments:

None of the Above

The government has given the go-ahead for construction of the Donald Tsang's Ego Memorial Complex on the Tamar site, which will cost us more than HK$5 billion of our money. While the design has some interesting features, it is apparently not the one that was preferred by a majority of respondents to the public consultation exercise, which presented four options. No surprise there - when did planning in Hong Kong ever give priority to the needs and preferences of ordinary people over those of the big property developers?

There is of course a fifth option which was never offered to the public: none of the above. The use of the Tamar site was rammed through by the government despite considerable sentiment suggesting better alternative uses for it.

Since the Legislative Council will move to the new site, the question arises of how the existing Legislative Council building - originally the Supreme Court - will be used in future. Dare we hope for some real public consultation on this? Or will it be yet another decision made behind closed doors?

And if you think the Tamar project is expensive, wait till you see the cost (if they ever dare to reveal it) of the Hu Jintao's Ego Memorial Bridge to Macau.
Posted by Private Beach at 12:31 pm No comments:

DaDa Dali and the Surreal Swimmers

I passed a van this morning with an ad on the side for an amateur swimming club with the domain name daliswim.com.hk - now that conjures up some intriguing visions! My wife (ever practical) said it's probably just an abbreviation for "daily swim", but I prefer my version. Now, where did I put my floppy watch...

And while we're on the subject of Hong Kong websites, how come the South China Morning Post website was down for a couple of hours earlier this morning?
Posted by Private Beach at 9:36 am 1 comment:

Nothing to my name - well, maybe a little

Interesting to see a lengthy interview (in English) with veteran Beijing rocker Cui Jian on CCTV-9 over the weekend. According to his Wikipedia entry, he is no longer blacklisted by the authorities in China; however, he did say during the interview "China has not changed" and "I will be a troublemaker forever".
Posted by Private Beach at 2:09 pm No comments:

According to last night's ATV news, the Hospital Authority would make a full investigation into the contaminated blood transfusion received by a patient in Tuen Mum Hospital (who has subsequently died), but was satisfied that hospital staff were not to blame.

Perhaps someone should tell them that it is a good idea to conduct the inquiry first and announce the conclusions afterwards; otherwise you run the risk of coming across like the Pakistani government, which within the space of a few days announced that Benazir Bhutto had been shot; then that she had been killed by shrapnel; then that she had fractured her skull on the sunroof of her car while ducking to escape a suicide bombing; then that it didn't matter how she died, only who killed her; then suggesting that she should be dug up again to establish the cause of death for sure. Now they have apparently come back to the original gunshot theory (after two videos emerged showing men brandishing guns in the crowd around her).

The Hong Kong incident also produced an early entry in the "stupid statements of 2008" file, when a hospital spokesman was reported as saying that the bacterium concerned, Pseudomonas Fluorescen, would do little harm to a healthy person. Since blood transfusions are not generally given to healthy people, this falls into the category of totally useless information. Once can only assume the intent was to make a serious situation seem more trivial in a feeble attempt to dilute criticism for it.
Posted by Private Beach at 1:33 pm 1 comment:

Is this any way to run a business?

"Ford is selling these units [Jaguar and Land Rover] to concentrate on its unprofitable US business."

Er.. wouldn't it make more sense to concentrate on your profitable businesses and dump the loss-making ones instead?

Meanwhile, the main news reported that Western Harbour Tunnel fees, already the highest among the three tunnels, will rise by $5 or more depending on the type of vehicle. Since many drivers already go out of their way (literally) to use the $20 Cross-Harbour Tunnel rather than the (currently) $40 Western Tunnel, this can only drive even more vehicles away from the tunnel, which has run at a loss since it opened.

Conventional economic wisdom suggests that where there are alternatives in the market, the best way to attract more business is to lower prices, not to raise them. Do the tunnel's owners know something we don't?
Posted by Private Beach at 9:32 pm No comments: