The best of the worst

There is plenty of competition for the title of "World's Worst Regime". Twenty years ago the Tiananmen Massacre would have seen China in with a strong chance.

Today the Kim Family Empire of North Korea is clearly a leading contender, spending the country's limited resources on developing nuclear weapons while the people go hungry. Robert Mugabe's achievement in turning one of the most prosperous countries in Africa into one of the poorest and most repressive through his greed, arrogance and incompetence also makes him a strong competitor. Saudi Arabia's treatment of women puts it on the list, as does Israel's six decades of trampling on the Palestinians, while Iran is mounting a spirited challenge following the (probably rigged) re-election of Ahmadinejad.

But for sheer out-and-out hypocrisy it would be very hard to beat the unpleasant bunch of aging generals who rule Burma. The BBC reports that they have just jailed two people for 18 months for "insulting religion" after they publicly prayed at a temple for the release of democracy leader Aung San Suu Kyi. This from the regime that showed its deep respect for religion in 2007 by murdering hundreds of Buddhist monks for protesting peacefully!
Posted by Private Beach at 10:05 am 2 comments:

Be sure to insert your earplugs before listening to the people

A few days ago the government held a "consultation session" with the people of Mui Wo on Lantau Island, supposedly to hear their views on the proposal to allocate a vacant school building in Mui Wo for use by a special school for the rehabilitation of teenagers with drug problems. As it turned out, local sentiment was overwhelmingly against the proposal.

In the few days since then, a series of senior government oficials have made speeches pleading with the islanders to be more understanding of the need for the school, and to accept the proposal. This proces culminated in the Chief Executive himself reiterating this appeal.

Seceral interesting points emerge from this series of events. Firstly, it is obvious that the government has already made up its mind to push the proposal through, and is unwilling to listen seroiously to any opposing viewpoint. In that case, why hold a sham "public consultation" if they had no intention of listening to counter-arguments by the Mui Wo residents in the first place?

Secondly, as I understand it from media reports, the main objection by most islanders is not to the proposal as such, but that they feel (quite reasonably) that any vacant school on the island should be allocated to their own children, who now have to make the long ferry journey to Hong Kong every day to attend classes. The government has apparently given them no answer on this point.

While no reasonable person would deny that teenagers with drug problems need help, the government's rush to move them to this school does not appear to be part of any coherent long term educational planning process. Rather, I suspect it is a panic reaction to several well-piblicised recent cases of young people being found under the influence of drugs in public places, together with pres stories of drug use in leading local chools. The governmen wants to be seen doing something positive quickly about this situation, however ill thought out their response may be.

When are we going to get a government that actually listens to the public, and places long term planning above short term PR exercises?
Posted by Private Beach at 12:02 am 1 comment:

Why Iranians are exactly the same as Americans

Despite all the political tensions between the USA and Iran, at heart Americans and Iranians are exactly the same.

Proof: the Iranians have just done in 2009 exactly what the Americans did in 2004 - re-elected a failed incompetent ill-informed loudmouth of a president just because he said the right things to appeal to religious conservatives.

P.S. (17 June) That is, if he actually did win the election - clearly a large proportion of the Iranian people don't think so. But then, objections to Bush's election were swept under the carpet as well.
Posted by Private Beach at 5:22 pm No comments: 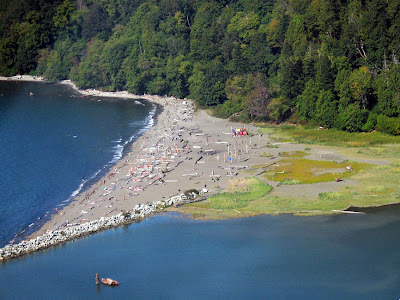 If you're wondering why I haven't posted much recently, it's because I was in Vancouver for two weeks in late April/early May (probably about my 10th visit in 20 years), where I was too relaxed to blog, and I've mostly been too busy to blog since getting back.

Visiting other places does put one's own home into clearer perspective, and much as I love Hong Kong, it has to be admitted that there are many things it could do better to earn its self-proclaimed "world city" status. For example:
A recent Economist survey declared Vancouver the world's most livable city. Hong Kong ranked 39th out of 127 cities included, the second highest in Asia after Osaka. Harare (Zimbabwe) came last.
Posted by Private Beach at 5:55 pm 4 comments:

I Should Be There 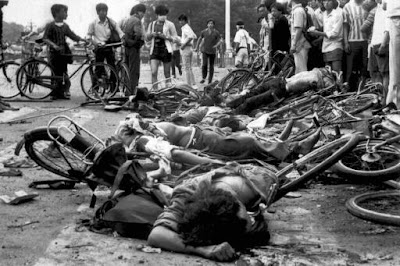 Every year I promise myself that I will attend the June 4th candlelight vigil in Victoria Park, and there's always some reason why I don't make it. But I do want to mark the occasion here - if only to tell Donald Tsang firmly and clearly that no, you do not speak for all Hong Kong people in trying to sweep the massacre under the carpet. You certainly don't speak for me.
Posted by Private Beach at 8:54 pm 2 comments: