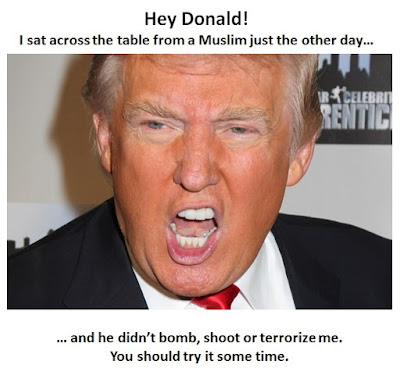 However, we did have an intelligent conversation - that may be a bit difficult for Trump to handle.
Posted by Private Beach at 4:27 pm No comments:

Today would be Frank Sinatra's 100th birthday if he was still alive - and it's interesting how reactions to Sinatra define one's age.  When I was a teenager, growing up on the Beatles, Rolling Stones and Bob Dylan, Sinatra was the epitome of unhipness (though 20 years earlier he had been the very epitome of hipness).  A liking for Frank's records then would have guaranteed the ridicule of one's classmates - though plenty of older people were still buying them.  Yet over time I came to appreciate his art and enjoy his recordings - or at least his earlier ones.

I think part of the problem was that in his later years, Frank tried too hard to keep up with the changing times.  This led him to record material - like Hey Jude, and probably Paul Simon's worst song, Mrs Robinson - that were simply not right for his voice and style.  The result was somewhat embarrassing, like seeing one's grandmother twerking.  But within his own comfort zone, Sinatra was unmatchable.  No one making the transition from youth to middle age can fail to be moved by the album September of My Years, Sinatra's meditative musical reflections on turning 50.

As a young man, I saw my musical hero Bob Dylan and Sinatra as standing at opposite ends of the musical spectrum.  yet Dylan's most recent album, the Sinatra tribute Shadows in the Night, did not come out of nowhere.  Dylan sang at Sinatra's 80th birthday celebration, and probably grew up on his music the way I did on Bob's.  We all tend to remain most attached to the music of our youth.

I will have more to say about music another time, but for now, let me just echo Bob's words: "Happy Birthday, Mr Frank".  And if you want to deliver that message musically, you may be interested to learn that the ubiquitous song Happy Birthday to You is finally out of copyright.
Posted by Private Beach at 10:23 pm 3 comments: 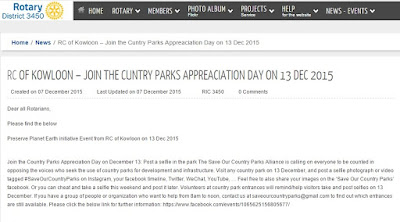 It looks like the Rotary Club of Kowloon could use some spelling lessons!  Be that as it may, at a time when the water that Hong Kong imports from the mainland has been found to be heavily contaminated with bacteria, it's a good idea to demonstrate public support for our beleaguered country parks.  In addition to supplying much of our clean fresh water, they are a vital haven for wildlife as well as being ideal for hiking, birdwatching, cycling, photography, and general relaxation - not to mention a peaceful retreat from urban noise and chaos, something that will increasingly be essential if we are to retain our sanity in the face of JHong Kong's expected population growth.

So get out and enjoy their scenic beauty tomorrow, post your pictures online, and show the government that we don't want this precious asset handed over to property developers to be smothered in concrete. 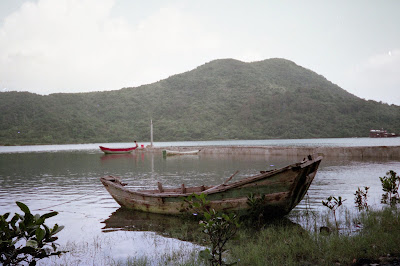 Making It Better:
Save Our Country Parks Alliance - and also on Facebook
Posted by Private Beach at 7:33 pm No comments:

Bringing Down the Curtain 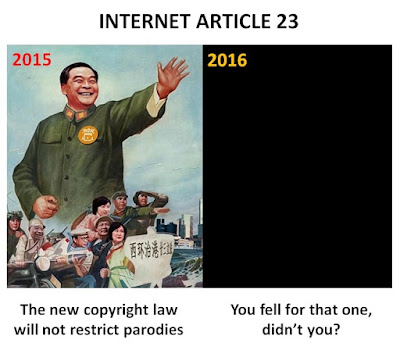 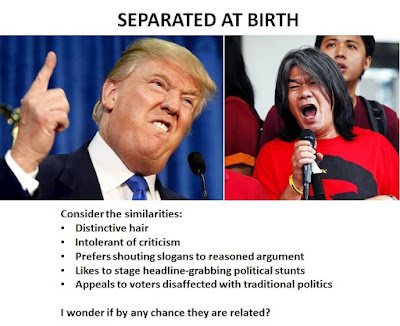 Posted by Private Beach at 2:35 pm No comments:

A number of American state governors are calling for a ban on Italian immigration following the St Valentine's Day Massacre, claiming that many Italians are terrorists and cannot be trusted.  Governor Bobby Swindle - himself a son of immigrants - spoke for them when he said: "They may look like peaceful refugees, but who knows how many more Al Capones are hiding among them?"

Meanwhile maverick presidential candidate Crazy Horse went further, calling for a total ban on all immigration by Christians.  "Time and again my people have been subjected to unprovoked terrorist attacks by white men claiming to be furthering Christian civilisation'" he said.  "The well-known terror incidents like Wounded Knee are part of a pattern of Christian terrorism against peaceful civilians - so many in fact that Wikipedia has a whole category listing Massacres of Native Americans.  The only solution is to stop all of these people, with their dangerous religious ideology, from entering the country.  We have no choice."

Posted by Private Beach at 11:58 am No comments:

The Company They Keep 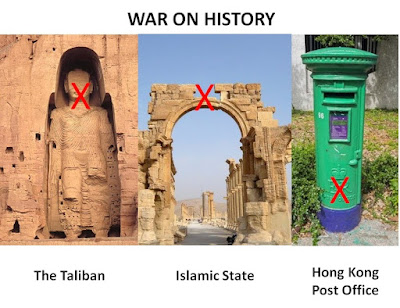 Posted by Private Beach at 2:37 pm No comments: