The official video celebrating the 15th anniversary of Hong Kong's reunion with China - "Memorable Moments" - perfectly illustrates the widening gap between government rhetoric and on-the-street reality in the SAR.  Almost the first shot depicts three goose-stepping PLA soldiers.  Whatever else Hong Kong people may dream about, it's certainly not the PLA, except perhaps in their nightmares on June 4th.

Far more in tune with the city's current mood is the parody version, "Who's Killing Our Dreams?"  It was perhaps with this kind of production in mind that the government recently tried - fortunately without success in the face of fierce public opposition - to introduce an amendment to the copyright ordinance that would have outlawed parodies.  They will probably try again.
Posted by Private Beach at 11:21 pm 1 comment:

Isn't it a depressing commentary on Hong Kong's progress towards the democracy supposedly promised to us by the Basic Law that the annual July 1st democracy march has, after ten years, become a local institution?  Far from moving towards democracy, we seem to be going backwards, with the forcing through LegCo of the government's iniquitous by-elections bill. 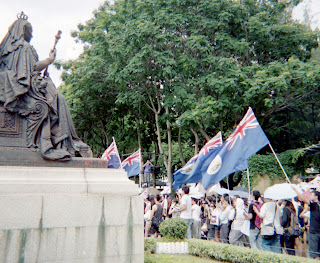 One new (to me, anyway) feature of this year's march was the number of people carrying the old colonial flag of Hong Kong - an extremely blunt critique of 15 years of Chinese rule.  I wonder what Queen Victoria was thinking about it, up there on her throne above the masses?

And how on earth do the police come up with their figures for the number of participants on this thing?  Their estimate of 62,000 is roughly 1,5 times the capacity of the Hong Kong Stadium.  Now, visualise everyone in the stadium, plus half as many again, and compare that with the turnout for the march.  A friend of mine was one of the first people to reach the government offices around 5:30 pm.  I didn't get there until 8pm, with at least a third of the procession still behind me.  The organisers' estimate of 400,000 may be overstated, but it's certainly closer to reality than the "official" figure.  Maybe the Hong Kong government wants to avoid frightening the Beijing government by letting them know just how pissed off local people really are with their rulers.
Posted by Private Beach at 6:22 pm No comments: