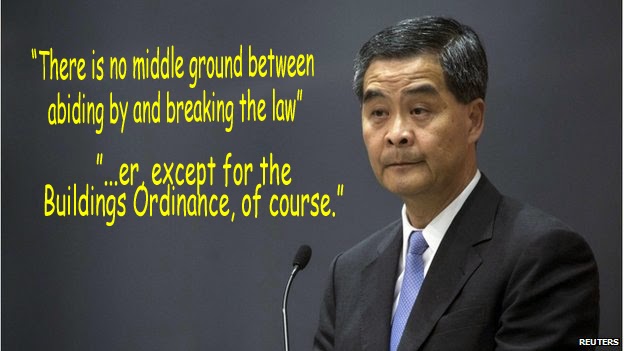 In strict legal terms, CY Leung's warning against Occupy Central may be accurate.  But as in so many other aspects of his "leadership", it betrays an alarming unfamiliarity with the real world.  The fact is, we all break the law regularly.  Just about everyone in Hong Kong is at some time guilty of, for example: jaywalking, speeding, illegal parking, bringing home a little more than the duty-free allowance when returning from overseas, eating on public transport, smoking in a no-smoking area, or (like Leung himself), making unauthorised alterations to our homes.  These are offences of the type classified in American law as misdemeanours - they may be against the law, but no one really thinks of themself as a criminal for doing them.  They form the middle ground that Leung tells us does not exist.

Yes, Occupy Central would be illegal - but what type of illegal?
Posted by Private Beach at 2:24 pm No comments: 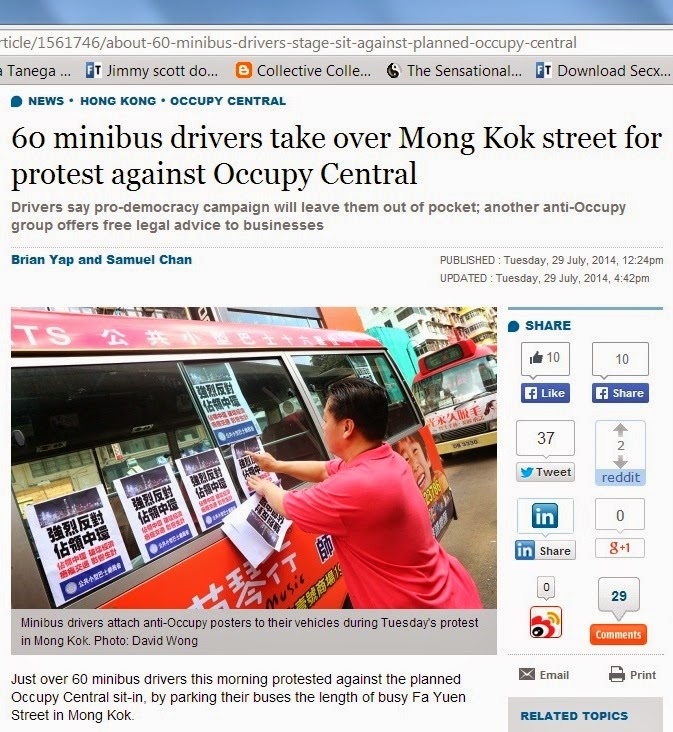 So let me see if I've got this straight: a group of minibus drivers take over the street to protest against people planning to take over the streets.  Hmm.  Another story for the "You couldn't make this stuff up" file.
Posted by Private Beach at 9:07 pm No comments:

The Book of Exodus

The Book of Benjamin 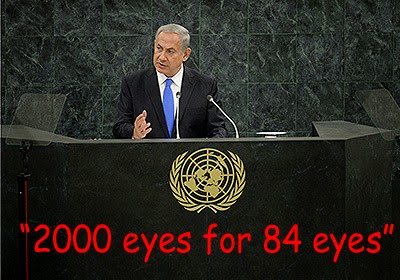 ...and rising, based on the latest reported death toll of 1,000 Palestinians  (mostly civilians) and 42 Israelis (mostly soldiers).

The continuing slaughter gave rise to what must be one of the most meaningless utterances ever by a prominent politician, when US Secretary of State John Kerry said


"They may have rejected some language or proposal within a framework of some kind of suggestion at some point in time, but there was no formal proposal submitted from me on which there should have been a vote or which a vote was ripe."


If this means anything at all, I think it means something like "I am embarrassed to be standing up here making excuses for our Israeli allies continuing to shoot at schools and hospitals despite the various ceasefire proposals being put forward, but I suppose I have to say something that doesn't sound too negative, so er...er..."
Posted by Private Beach at 8:19 pm No comments:

By a rather unfortunate coincidence, the South China Morning Post had this:

on its website today in close proximity to this: 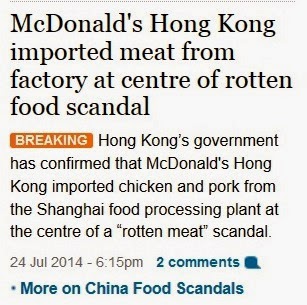 I think we can safely rule out one contender for best burger in town!

Posted by Private Beach at 8:02 pm No comments: 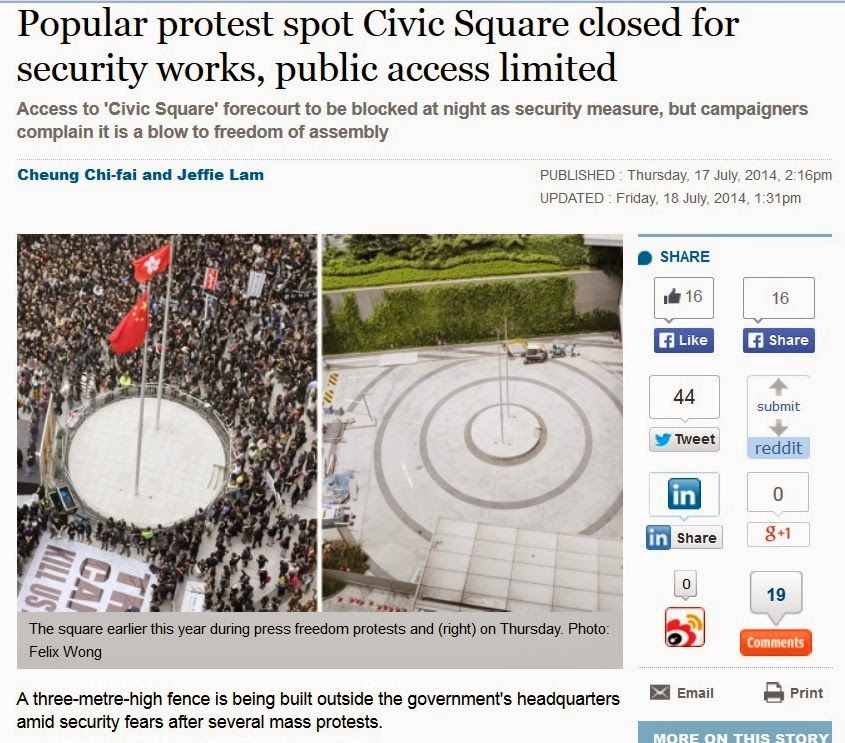 This is yet another sign that Hong Kong is gradually being transformed from reality to fiction.  Those who have read Catch-22, one of the last century's greatest novels, will remember Major Major Major Major, who only allows people to come to his office to visit him when he's not there.  The character's resemblance to the Hong Kong government is heightened by his total ineptitude.

However, from ancient Jericho to Berlin, all walls will one day fall... 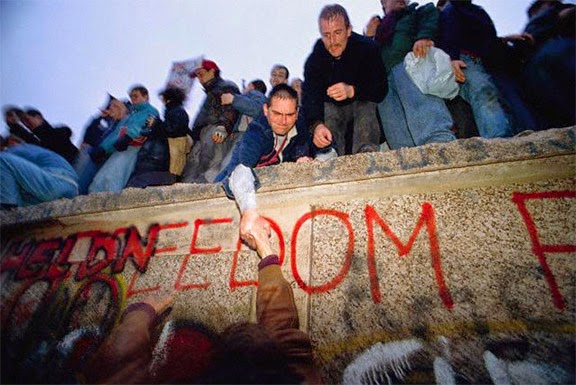 Yes, But Which Mainstream? 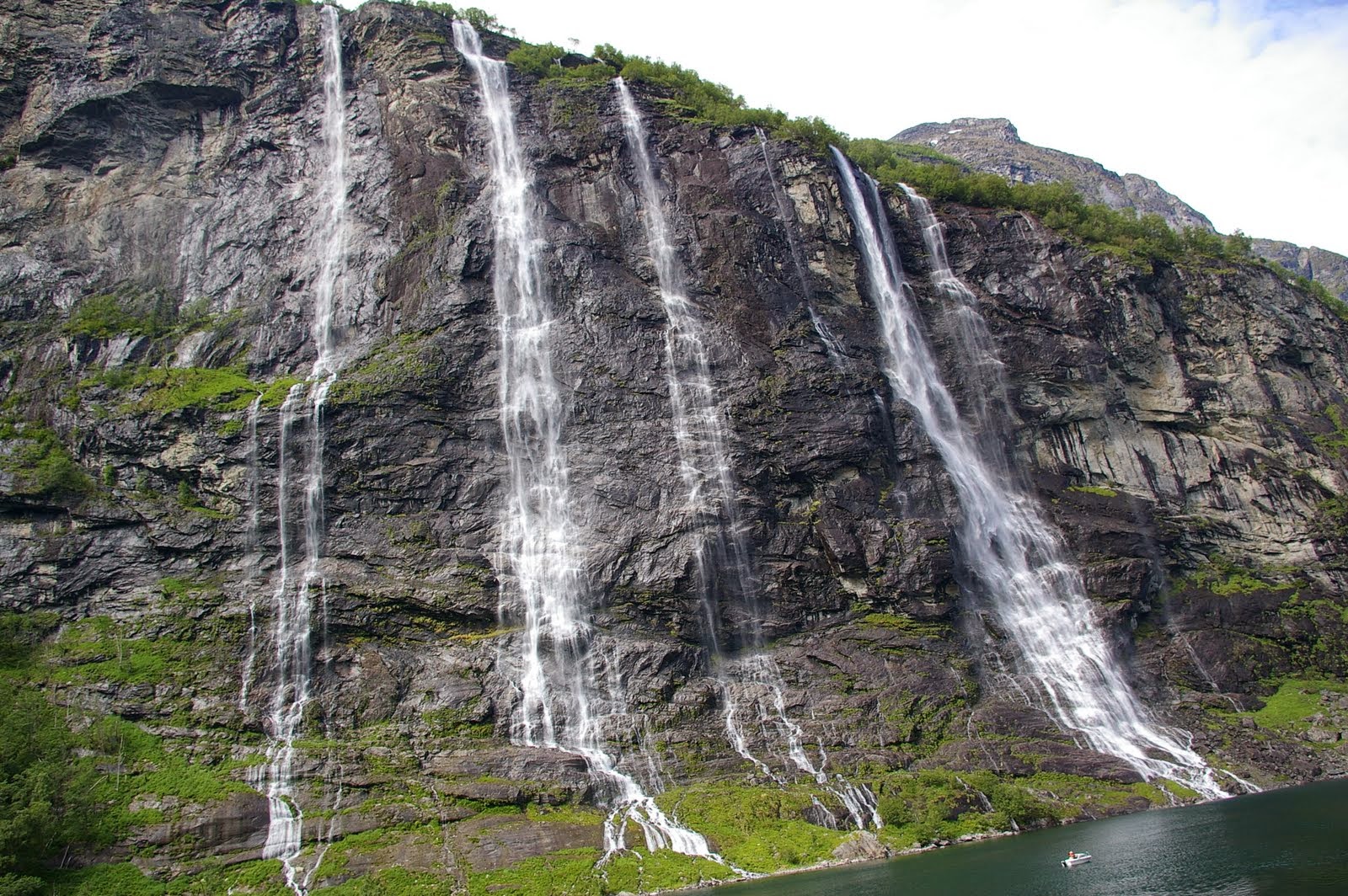 Which one is the mainstream?

Quite apart from the bare-faced nonsense it spouts about the CE election (see yesterday's post), the government's report on constitutional reform claims that mainstream opinion is that the functional constituencies in the Legislative Council should be retained (or more specifically, that the present composition of LegCo need not be changed).  This may be the mainstream opinion in Government House, but out here in the real world I don't know anyone who shares it except those who benefit from the undue influence the FCs give to a few selected groups.  Most people can't wait to see the back of these rotten boroughs and hopefully enjoy a more genuinely representative legislature - which would at least bring some balance to a system in which it has obviously been decided already from on high that we're not going to get a genuinely representative Chief Executive.

In yet another sign of how far Hong Kong politics has drifted from reality, ATV news tonight reports that "Beijing's mouthpiece newspaper the Global Times published an editorial today hailing Chief Executive Leung Chun-ying's own report on political reform as 'more representative than any other voice in Hong Kong and the best definition of the SAR's current situation'".  So don't worry, Daddy knows best - but more representative of what exactly?

The Global Times article also claimed that mainstream opinion in Hong Kong had been "hijacked by extremists".  That must explain the 800,000 mainstream people I saw recently being dragged kicking and screaming into polling booths to vote in the Occupy Central civil referendum.  Not to mention the hundreds of thousands marching from Victoria Park to Tamar at gunpoint on 1st July.

[Note to humourless CCP minions - the previous paragraph is satire.  Don't quote it as fact.]
Posted by Private Beach at 9:45 pm 2 comments:

Man is born free, and everywhere he is in chains

The Hong Kong government's report on the consultation on political reform has been out for less than 24 hours, but already I don't like it.  A hundred pages of barely readable blah blah blah minutely depicting which party said what about what (playing up the contributions the government likes), then a conclusion that "mainstream opinion" follows the government line (i.e. shut up and accept whatever crumbs of democracy Beijing graciously condescends to throw under the table for us).

Mainstream: "the ideas, attitudes, or activities that are regarded as normal or conventional", says one dictionary – as if anything in Hong Kong these days can be corralled into that description.  It certainly doesn't belong in a report of this nature.  If half the population thinks black, and half thinks white, does that mean mainstream opinion is grey?

Nowhere is the government brave enough to say what majority opinion thinks – perhaps because there isn't one.  What we have is a population split between two philosophies of the world: the truth that humans are born with certain innate rights to self-determination, and the big lie that they are only entitled to as much freedom as the government chooses to give them.  The entire apparatus of Chinese rule is devoted to propagating this lie.  So, alas, is that of the Hong Kong government.

Posted by Private Beach at 9:06 am No comments:

In a nice bit of synchronicity, I decided to read a couple of pages of the book I'm currently working through - Thief of Time by Terry Practchett - this morning after being up half of the night watching Germany win the World Cup, when within a few sentences I came upon this:


"Lu-Tze had long considered that everything happens for a reason, except possibly football."

Posted by Private Beach at 5:33 pm No comments:

A Sermon from the Archbishop of Hong Kong 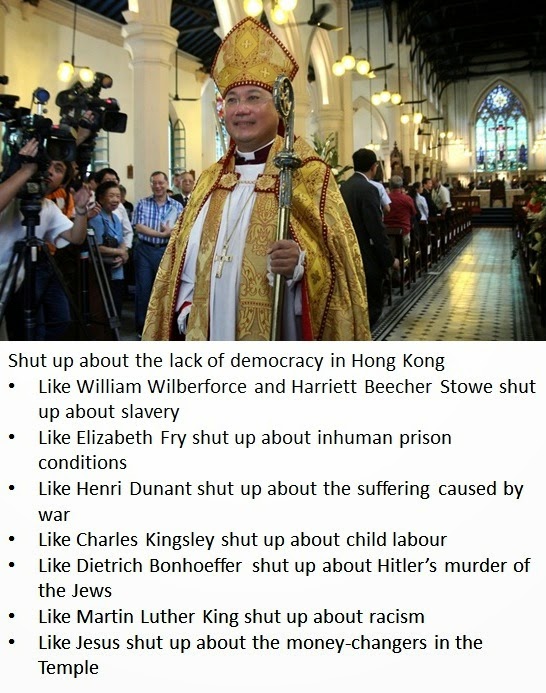 The impasse in the Finance Committee of the Legislative Council is of course a political game.  On the one hand, the pan-democrats are offering to move the less controversial expenditure items up the agenda to get their funding approved before LegCo's summer break, while continuing to block those items they disagree with.  On the other hand, the government is refusing to change the sequence, presumably with the aim of persuading the easily fooled that it is the pan-democrats' fault they will not receive their promised CSSA bonus and other budget giveaways.

Well, don't be fooled.  There are three things wrong with the position taken by the givernment and the establishment parties:

Posted by Private Beach at 4:35 pm No comments:

There are too many things going on to write at length about all of them (I have to work, you know).  So, just a couple of quick reactions to some recent snippets of news.

"Tourism Board chairman Peter Lam Kin-ngok warned that Occupy Central could harm tourism in the city."
-- So, another reason to welcome Occupy Central!

And in China, an appeal court believes a totally nonsensical story and reduces a killer's sentence to 7 years.  This one is so absurd that even the usually Pro-China Morning Post gives space to demolishing it.  See also here and here. 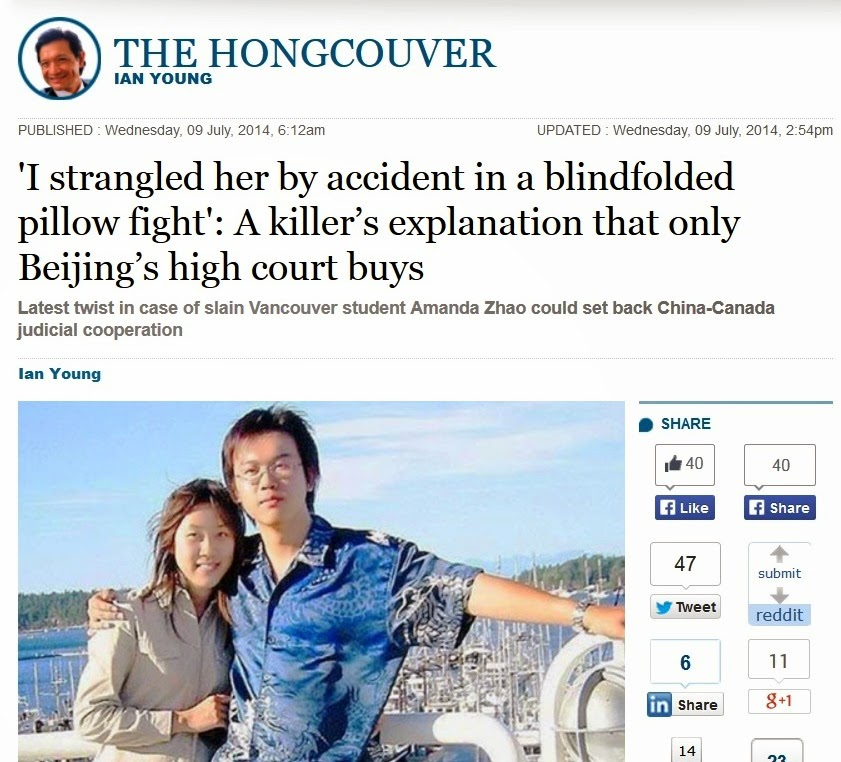 -- Oh well, it may not be justice, but at least we can be sure the judges are patriots!
Posted by Private Beach at 2:28 pm No comments:

Much ado about much ado 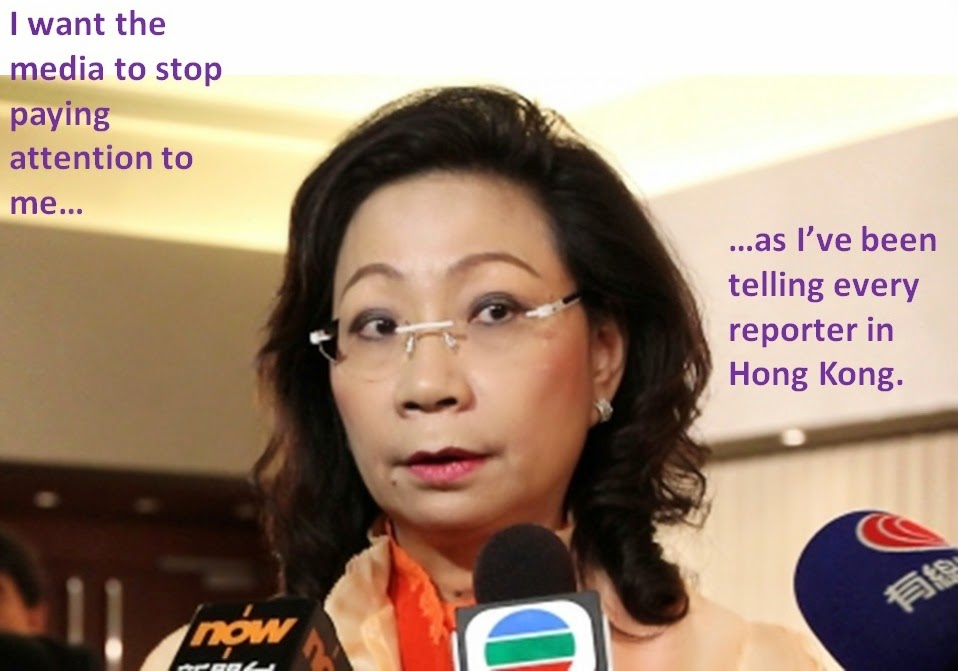 A History Lesson from Xi Jinping 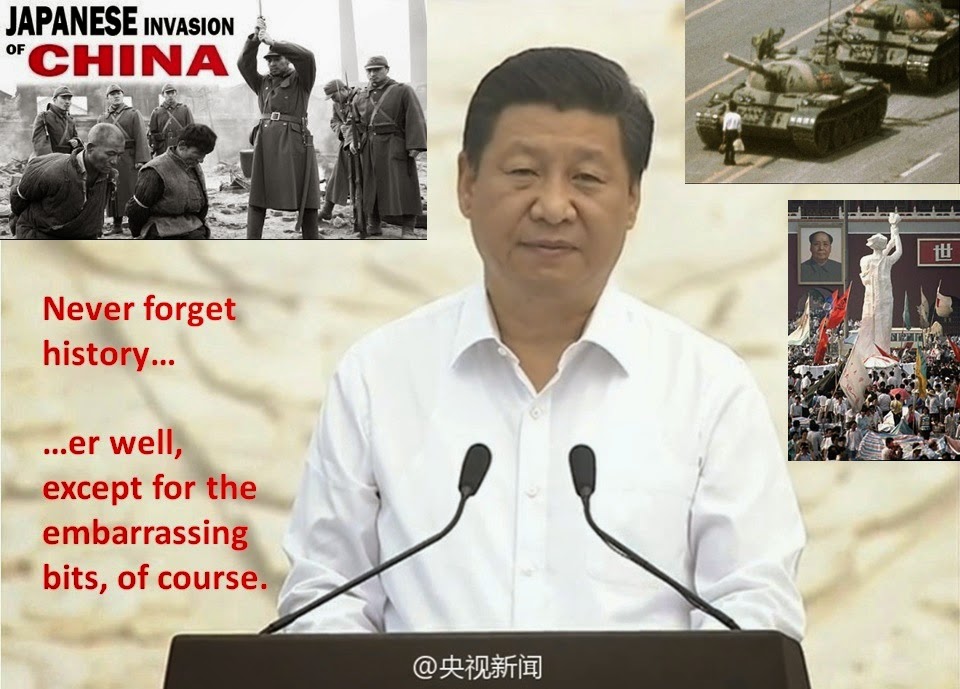 Posted by Private Beach at 4:39 pm No comments: