Acts of Government or God

While many disasters can be blamed on the Hong Kong government, it's a bit much for Stanley residents to claim, as today's Morning Post reports, that "the government is entirely to blame" for the tragic death of a 19-year-old girl crushed by a falling branch from a tree in the village. The fact is that every year around the world, thousands of people are killed or injured by falling trees. These incidents are known as natural disasters, or in insurance terminology, "Acts of God" (or whichever imaginary supreme being you choose to blame for the universe)..

While the government is right to recheck other old trees, and will no doubt review its inspection techniques, which appear to have missed some warning signs in this case, falling trees are a natural event. If we cast around looking for someone to blame for every Act of God, we will end up like the USA, where people's first reaction is to look for someone to sue whenever anything bad happens to them.

I also fear that this accident will lead to demands from the more ignorant sectors of the population for the removal of any tree that might possibly fall on anyone at some future time, leaving our city even more a desolate mass of concrete than it is already.
Posted by Private Beach at 4:53 pm 1 comment:

The man who invented R&B

The great record producer Jerry Wexler, the man who coined the term "rhythm and blues" to replace the old "race records" epithet, has died aged 91. There's a nice tribute here at The B-Side blog..

I have a copy of Dusty in Memphis signed by Wexler. Ironically Dusty Springfield was so paralysed with nerves in Memphis that only the backing tracks were recorded with the ever-reliable studio crew there; Jerry had to coax the vocals out of her during a number of follow-up sessions in New York. This painful process eventually brought forth one of the finest of the many great albums that bear Jerry's name as producer.

Wexler was a man of many talents: a successful businessman, except for his one great mistake of selling out Atlantic Records to Warner Brothers, which he came to regret; and a songwriter whose name appeared as co-composer of some of the records he produced. But his real genius - like that of Geroge Martin with the Beatles, an ocean away - was in getting the best out of srtists, and never more so than with Aretha Franklin. Aretha's earlier and later recordings show occasional flashes of brilliance, but her reputation as the Queen of Soul rests solidly on the string of magnificent masterpieces she turned out at Atlantic under Wexler's direction.

In the last few years many of the greats of the music business have passed away: Ahmet Ertegun, who founded Atlantic Records; Ruth Brown, who fought him for years for unpaid royalties, while always respecting his musical taste; Bo Diddley just a couple of weeks ago; Wilsonn Pickett; ... the list goes on and on. Now there's another bright star in rock-n-roll heaven - R.I.P., Jerry.
Disclaimer - I get a small commission from Amazon if you buy the CD through the link here. This is the version with additional songs; there's another one with the mono versions of the singles from the albums. Both are great.
Posted by Private Beach at 10:35 am No comments:

Well, I found the identity of my sodturner - just a few minutes ago, I caught a big fat magpie in the act (though I wasn't quick enough to get a photo). Puzzle solved - now, how do I stop him doing it?
Posted by Private Beach at 3:25 pm 4 comments:

Sods' Law for the birds 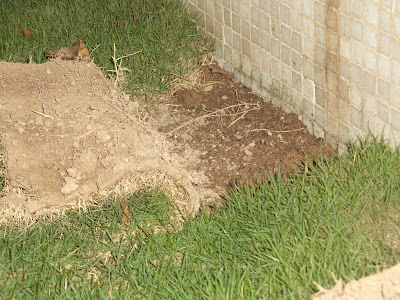 We recently had our garden returfed, as the grass had degenerated into 90% weeds. Just as last time we did this, within the next few days we found on several occasions that the local birds had succeeded in turning over some of the the squares of turf, presumably to get at the bugs or other tasty morsels beneath them.

I don't know which bird is doing this, but as each piece is about one foot square, it must take quite a bit of strength. Does anyone know if this is common behaviour for birds? And which species might be responsible?
Posted by Private Beach at 10:52 am 5 comments:

There seems to be no limit to the arrogance, insensitivity and sheer inhumanity of the Bush regime. Having destroyed Iraq at enormous human and financial cost (see the right sidebar), they are now complaining that the Iraqis should be the ones paying to repair the damage. Bloody cheek!

Meanwhile, Paris Hilton, of all people, has done a good job of making John McCain look ridiculous, after he compared Barack Obama to her as a lightweight celebrity in a campaign ad. I have long suspected that behind that fluffy party girl image, the Hilton genes have given Paris a sharp entrepreneurial brain; her response to McCain confirms that she also has a lively sense of humour.
Posted by Private Beach at 10:42 am No comments:

To the Hong Kong Observatory
I know weather forecasting is an imprecise science, but could you try not to sound so confident that no higher signals will be raised next time we're on number 3?

To TVB and ATV
When we wake up and find there's a number 8 signal, the only thing we really want to know is how long we can go back to bed for. If you must give us all the other boring stuff about cancelled ferries, fallen trees and scaffolding, and calling the airlines before going to the airport, could you just scroll along the bottom of the screen how long the signal is expected to be up for?

To the Hong Kong Government
Aren't you ashamed that your system for allocating Form 6 secondary places is so inefficient that students and their parents are willing to risk their lives staying out queuing in a Number 8 Typhoon to secure one of the last few precious places? It doesn't work that way for university places.

And why aren't there enough places in the schools for every student who meets the qualifying standard anyway? Don't tell me you're short of money when you're just about to spend billions on the Hu Jintao's Ego Memorial Bridge to Macau without even asking the taxpayers whether they want it.
Posted by Private Beach at 11:05 pm No comments: