My Enemy's Enemy Is Not Always My Friend

I can rarely see George W Bush spouting his latest poisonous nonsense without feeling angry - do you feel that, too? Not long ago the idiot was on TV telling the long-suffering American people that defeating Al-Qaeda in Iraq is vital to America's security. In that case, why the hell didn't he just leave Saddam Hussein in power?

Under Saddam, Al-Qaeda had no presence in Iraq; for all his faults, he at least kept religious fanaticism firmly suppressed. It was the American invasion that gave Al-Qaeda the chance to enter the country, presenting themselves as heroic allies of the Iraqi resistance to the invasion, and giving them the biggest recruitment opportunity they had ever enjoyed.

The USA (and its lapdog Britain) are very good at creating their own enemies. Support the courageous Mujahideen fighting Russian communist control in Afghanistan, and watch them mutate into the dreaded Taliban. Build up the military might of the secular Saddam Hussein against the mad mullahs of Iran, and watch him turn it against Kuwait.

Most of the time, America and Britain would be better off if they kept out of physical intervention in other countries' affairs. At the least, they should learn that believing the old saying, "My enemy's enemy is my friend" is often foolish and dangerous.
Posted by Private Beach at 1:29 pm No comments:

Bring Out Your Dead

I wrote back in April about the reduced frequency of household waste collection in Britain. Now Private Eye has a nice cartoon on the subject: 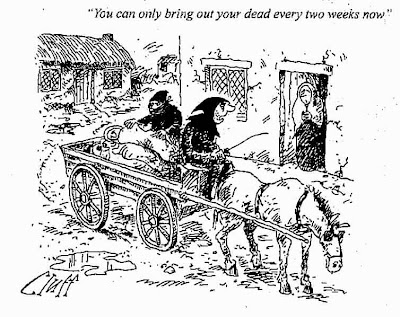 This reminds me of the old Monty Python sketch:

Bring out your dead!

A family dump a struggling old man on the cart. He vociferously complains, "But I'm not dead yet!"

Posted by Private Beach at 2:11 pm No comments:

It comes as no surprise that the Star Ferry is applying for a price rise on its Hung Hom routes, probably to be followed by its Tsimshatsui route soon. As everyone with a brain predicted, passenger numbers have slumped since the government moved the Central terminus from its former convenient location to an inaccessible new home in the middle of nowhere.

Have Hong Kong's planners never heard of integrated transport? Sometimes they get it right, as in extending the KCR back to Tsimshatsui to connect with the MTR there, but all too often they seem to look at one transport mode in total isolation from others, destroying connections instead of creating convenient interchanges between them.
Posted by Private Beach at 11:23 am 1 comment:

The Rip-off Files 1: What you see is not what you get

How's this for deceptive and wasteful packaging? I know it says 28 pieces on the wrapper, but I don't think any purchaser would expect 40% of the space inside to be taken up by cardboard and air. Less for the consumer and more for the landfill.

Purchased from PARKnSHOP, as they now write their name. (Thank you, Mr Li).
Posted by Private Beach at 4:04 pm 4 comments:

Several American senators are planning to introduce a bill in the Senate to push China to accelerate the rise in its currency, in order to ease its gigantic trade surplus with the United States. This only proves that politicians don't understand economics very well.

The intended consequence of this bill is to sell more American goods to China and slow the flow of Chinese goods into the USA. However, a sharp rise in the RMB may well have other effects:

Have they really thought this out, I wonder?

Posted by Private Beach at 5:03 pm No comments:

What's up with Blogger? For some reason, whenever I log in since yesterday it now shows everything on the screen in Chinese. There doesn't seem to be any button to click on to change language, and I can't use the Help function to sort it out because that's in Chinese too. Nor can I see any language indicator in the URLs it's using that I could try changing to "en".

Is it detecting a Hong Kong IP address and using Chinese because of that? If so, someone should tell the idiots at Google (Blogger's parent) that not everyone here is Chinese. Meanwhile, my annoyance level is rising....
Posted by Private Beach at 4:53 pm 3 comments:

ATV's English news the other night reported that some parts of Lantau Island had received 100 millimetres of rainfall in 24 hours. Now that's quite a lot (about 4 inches for the metrically challenged), but the subtitles showed it as 100 metres! If true, that would pretty much have washed away every village on the island except Ngong Ping - not to mention the airport.
Posted by Private Beach at 4:55 pm No comments:

Hong Kong's Chief Executive Donald Tsang is an efficient administrator, but as a former top civil servant he is, I fear, better at carrying out orders than at coming up with new ideas himself. I have long believed that the Hong Kong government's major weakness (apart from constantly attempting to second-guess Beijing's wishes, instead of deciding on the best policies for the SAR and then selling them to the central government) is lack of imagination.

Sadly this lack has been demonstrated yet again in the appointments to Tsang's revamped cabinet. There are no real surprises on the list, and several familiar faces playing musical chairs. One such move sees current Director of Information Services Edward Yau Tang-wah succeeding the largely ineffective Sarah Liao as Secretary for the Environment, Transport and Works.

No doubt Yau is competent enough; but according to The Standard today, "despite Yau's lack of an environmental track record, he beat pan-democrat candidate, the Civic Exchange's executive director, Christine Loh Kung-wai, for the post". Now that really would have been an imaginative appointment (if she accepted it): Christine Loh's environmental credentials are impeccable, she is highly articulate (in English as well as Chinese), creative, and as a former legislator she knows well how LegCo works.

Not only that, Loh is 100% committed to democracy but, being more diplomatic and less abrasive than many in the democratic camp, manages to avoid making too many enemies on the pro-Beijing side; as such she could have helped to bridge some of the divisions between the two sides that make necessary compromises on many issues difficult to achieve.

And if all these qualities aren't enough, she is to my knowledge the only Legislative Councillor ever to have admitted (in an HK Magazine interview) to enjoying skinnydipping!
Posted by Private Beach at 4:29 pm 1 comment:

One of those mornings:

In a mean mood today, I was entering the lift at 1 minute to 9 with 4 or 5 other people when I spotted the building's shuttle bus arriving. Knowing this would mean a flood of people coming, I hastily pressed the Doors Close button to get us up, up and away before they reached the lift. Pressed several times, but nothing happened.

Then I observed that the jerk on the other side of the lift was frantically pressing the Doors Open button to keep us all waiting while his dear colleagues got off the bus and joined us. Very un-Hong Kong of him.

When I finally reached my office and checked my email, I found a junk mail beginning "Dear Sir/mad". How did they know?
Posted by Private Beach at 11:33 am 1 comment:

Poor Paris Hilton! Sent back to prison where, according to one of her friends, "“It’s so cruel what has happened to her. She wasn’t allowed to wax or use a moisturiser. Her skin is so dry right now.”

Meanwhile I was talking to my mother last night when her doorbell rang. She called me back later to tell me it was her neighbour, informing her that the young man who cleans her windows had been knocked off his bike and killed by a drunk driver.

Well, Paris, some people get arrested for drunk driving and sent to prison where, no matter how rich they are, they have to suffer the indignity of dry skin. Others get killed by drunk drivers - how cruel is that? - which is why we send drunk drivers like you to prison. Get real, you spolied brat.
Posted by Private Beach at 12:57 pm No comments: