Try this: Google "Epson scanners" and see what comes up first.

Now if I type in "scanners", I don't mind Google taking money from HP to place theirs ahead of others. But when I specifically search for Epson, I don't want to see HP at the top of the list. In fact, Epson only comes 4th. True, Google identifies the first 3 entries as ads, but still...

It doesn't feel right to me. What do you think?
Posted by Private Beach at 10:34 pm 2 comments:

From a BBC story about the Korean robotics industry:

The South Korean defence company DoDAAM is also developing robotic gun turrets for export which can be programmed to open fire automatically.

Does this sound to you like the beginning of Skynet? And who are they exporting them to?

Have these people never sen Dr Strangelove?
Posted by Private Beach at 6:39 pm No comments:

Shown on a screen on the Hong Kong side of the Lo Wu border crossing:

Yes, but which hand - left or right? Decisions, decisions...

Coach Trip to the Dentist

When setting the video recorder for another programme the other day, I caught a few minutes of Coach Trip by chance. For those who don't know this programme, it's a kind of "Big Brother on Wheels" - the idea is to dump a bunch of publicity-hungry strangers together in an artificial environment, in this case a coach tour around the sights of Europe, and hope to derive entertaining television from their ego trips and petty squabbles.

As with all "reality TV", it bears about as much relation to reality as Britney Spears does to real music, and what I saw convinced me that I would never want any of the participants as travelling companions. But what struck me particularly about it was that almost all the participants appeared to have awful teeth. I wonder if the producers secretly intended it as a searing satire on the sad state of British dentistry?
Posted by Private Beach at 1:20 pm 5 comments:

Since I often make fun of ATV News's errors here, it's a pleasant change to have a go at their rival TVB instead. Listen guys, when you're talking about the NFL (National Football League - or at least what Americans call football), it may not be a good idea to display the NHL (National Hockey League) logo on the screen. Clue: if they're playing on a green surface, it's not ice.
Posted by Private Beach at 1:15 pm No comments:

Signs of the Times in China 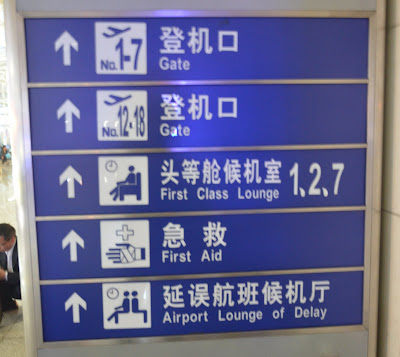 One of the things that makes visits to China interesting is the signs there, either for their curious English , or for what they reveal of Chinese thinking. The last line of this direction sign in Jinan Airport, for example, tells you all you need to know about flying in China. 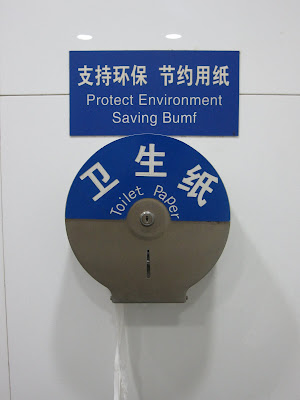 Then there is this. "Bumf" originally meant bumfodder or toilet paper in English usage, but then came to be applied more commonly as a slang term (now somewhat archaic) for unnecessary paper such as unwanted circulars, junk mail, pointless memoranda and the like. It seems that someone in China wants to restore its original meaning.
Posted by Private Beach at 2:42 pm No comments: