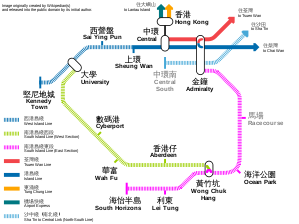 Some LegCo members have recently been objecting to the government's policy of granting land for development by the MTR Corporation to fund the construction of the South Island Line. The problem with this is that they don't seem to be offering any alternative.

No one who observes the air pollution and traffic congestion in Hong Kong can doubt that the territory's railway network needs to be extended. And most would agree that it makes sense to integrate any extension with the existing network, which means putting it under the MTR rather than a new operator.

If we accept these assumptions, the several planned new lines will not build themselves. Given the vast sums of money required to construct them, what is the least painful way of financing these developments? The government could hand out cash to cover the cost, which means taxpayers would bear the burden directly. Or it could require the MTR to fund it out of its own revenues, which would almost certainly mean fares rising substantially to pay for it. With many already objecting to the recent modest fare increase at a time of inflationary pressure, this would be politically unacceptable and would probably drive many passengers back on to the overcrowded roads as a cheaper alternative.

Of course, the property method is also depriving the taxpayers of the potential revenue that would otherwise accrue to the government from the sale of these sites, but in the current circumstances it seems the least objectionable way of achieving the desired goal. The real objection in my view is that, since the MTR is partly privatized, some of the eventual return from this handout will go into the hands of private investors at the expense of the taxpayers. The MTR should have been left in full public ownership.
Posted by Private Beach at 4:46 pm No comments:

The Americans are Winning

Being out of England for most of the time, I tend to notice small changes when I'm there that may be imperceptible to those who live there. One of these is the creeping Americanisation of the English language. Not only do we have a whole generation who use American spelling because they've never bothered to change the default spell checker in Word to British English, but American vocabulary is gradually replacing British usage.

One of the changes I observed on this year's visit is that the original British "railway station" has largely given way to "train stati0n", which in my childhood would have been understood but considered an Americanism. Now that usage makes sense, since "bus station" was already common British usage, but why don't we call an airport a "plane station" to be consistent?
Posted by Private Beach at 7:57 am 2 comments:

Sepp Blatter's statement that FIFA - world football's governing body (that's soccer for American readers) - is "not in crisis" is about as credible as Muammar Gaddafi's claims that all the Libyan people love him. Nevertheless, Blatter's re-election as head of FIFA was entirely predictable - and not just because his only challenger was conveniently accused of corruption and sidelined before the vote.

In the welter of corruption allegations, firings and reinstatements, and general chaos it's hard to know the truth. But a look at most of the FIFA bigshots will tell you one sure thing - from the size of their waistlines, most of them have not actually played football for a long time - indeed, it's doubtful they would last more than 5 minutes on the pitch before collapsing.

The fact is that FIFA is an entrenched bureaucracy - and the first task of any bureaucracy is always to perpetuate itself. While Blatter likens his role to captaining a ship, what he is really doing is driving a gravy train. And as long as he keeps the gravy - free tickets to big games, lavish banquets, foreign trips, and perhaps additional benefits - flowing, most of its recipients will continue to support him. As the French say, the more things change the more they remain the same.
Posted by Private Beach at 11:38 am No comments: