Far from the Madding Crows 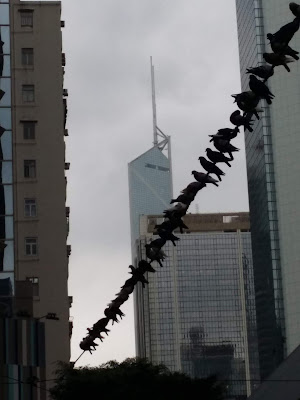 I was originally going to name this piece either Pigeon Post, after the Arthur Ransome story, or Like a Bird on the Wire, after the Leonard Cohen song, but then I accidentally came up with the typo above which seemed to fit a bird-related post.

The pictures come from the point where Johnston Road turns off from Hennessy Road in Wanchai by the Chinese Methodist Church.  For some reason, large flocks of pigeons regularly gather on the tram lines at this point.  What puzzles me is why they choose this particular perch - some nearby food source perhaps?  Or are they devout Methodist pigeons waiting for the next service to start?  Perhaps any ornithologist reading this could suggest a reason. 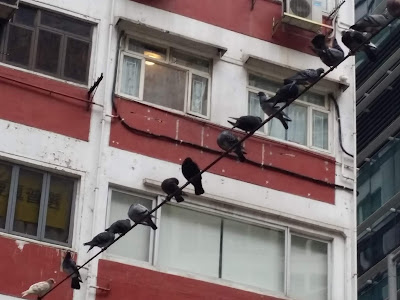 Posted by Private Beach at 6:11 pm No comments:

Posted by Private Beach at 3:53 pm No comments:

Posted by Private Beach at 11:56 pm No comments:

The Moral Bankruptcy of Julian Assange

Julian Assange's arrest in London has brought forth predictable howls of outrage from those who view him as a hero of press freedom, from perennial anti-American propagandist John Pilger to indifferent actress turned semi-coherent political activist Pamela Anderson.  But is the Wikileaks founder the saint they make him out to be?

Wikileaks was certainly founded on a moral principle: the belief that governments use their control of information to lie to, deceive and manipulate their own people, and that ordinary people should have the opportunity to see this information and know what their government is hiding from them.  A noble idea, though somewhat marred by the fact that the most repressive governments - like those of Russia and China - tend to spawn the fewest whistleblowers, meaning that in practice most of the secrets exposed by Wikileaks come from relatively open societies - in particular the United States of America.

When it came to the 2016 Presidential election in America, Wikileaks got hold of a large cache of emails from parties related to Hillary Clinton's campaign.  What we now know from the Mueller investigation and other sources is that Assange released these in stages in a way calculated to hurt Hillary's campaign and get the odious Donald Trump into the White House.  In other words, Assange was doing exactly what Wikileaks purports to be campaigning against - using his privileged access to information to manipulate political outcomes.  In the process, he helped to elect the worst President in American history - but even if he had thrown his influence the other way, he would still be not a hero, but a hypocrite.
Posted by Private Beach at 10:44 pm No comments:

Posted by Private Beach at 9:31 pm No comments: 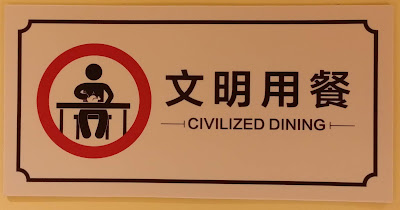 You have to wonder what kind of dining took place before the restaurant posted this notice!
Posted by Private Beach at 6:45 pm No comments: