A cunning plan (no turnip involved) 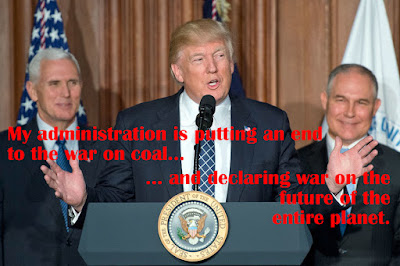 In a world where the lunatics have not only taken over the asylum, but are clearly intent on returning it to the Dark Ages, it is easy to become disheartened.  But there is something the rest of the world can do to fight Trump's short-sighted environmental menace.  Just suppose that all of America's trading partners got together and agreed to impose a climate tax of say 10% on all imported American products, to be lifted only if the US lives up to its commitments under the Paris climate change agreement.

Could this happen?  It may sound an impossible dream to get so many countries to agree on anything, but if they could overcome their differences to set up the Paris agreement, then it can be done again.  After all, the stakes could not be higher - the Earth's sustainability as a habitat for life.  Our life.  Spread the idea.
Posted by Private Beach at 11:31 am No comments: