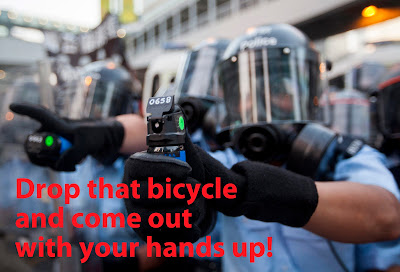 If they really want to punish people for obstructing the streets, why don't they take action against the masses of smugglers who routinely block entire thoroughfares in the northern New Territories to sort out their goods?  Or do they just like to pick on easy targets who are not doing any harm?
Posted by Private Beach at 1:38 pm

He was probably reported by people who make a living from bicycle repairs. If so, one must have some sympathy with their point of view.