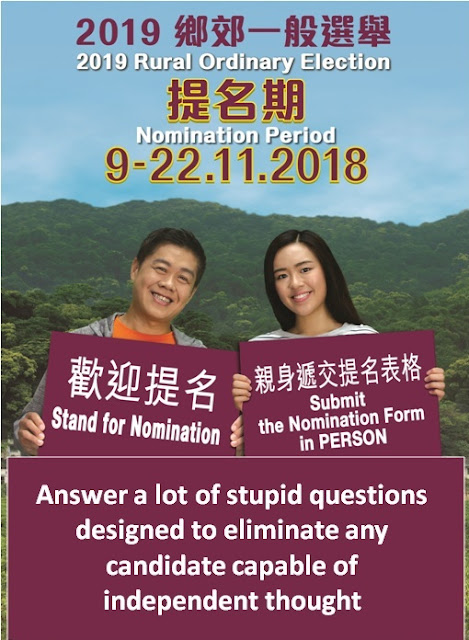 "Permanent residents of the Hong Kong Special Administrative Region shall have the right to vote and the right to stand for election in accordance with law."
--Basic Law, 1997

Having asked Eddie Chu the same question several times over in different ways in the hope of eliciting an answer he can use as an excuse, the Returning Officer has finally kowtowed to the Liaison Office's wishes by disqualifying Chu - the most popular candidate in any constituency at the last Legislative Council election - from running for the post of village representative.  Unjustified, ridiculous, and legally questionable, but not unexpected in today's political climate, where every promise of genuine autonomy and democracy for Hong Kong is being systematically shredded.  What really irritates me is the way the government insults our intelligence each time it further restricts the limits of allowable political discourse by insisting that:


“There is no question of any political censorship, restriction of the freedom of speech, or deprivation of the right to stand for elections as alleged by some members of the community.”

Do they think we're totally brainless?  Or are they too stupid to realise this is a blatant lie?
Posted by Private Beach at 6:46 pm